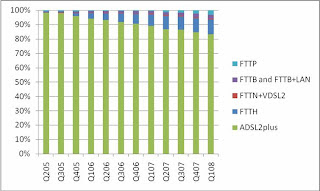 IPTV subscribers have more than doubled for the second year running with an increase of 53.14 percent in the 12 months to 31 March 2008, and now stand at 15 million, according to Point Topic.

The statistics also show that worldwide broadband subscribers have reached over 370 million with DSL remaining the most dominant access technology with 65 percent of the world’s subscribers. However, fiber subscriptions have risen by 33 percent since the beginning of 2007, with over 10 million people connected to a fiber network. This increase in fiber subscriptions may be attributed to the increased popularity of bandwidth hungry services such as IPTV. However, the leading technology delivering IPTV today is ADSL2plus, with 12,049,817 subscribers.

Europe has over 8.4 million subscribers, making it the strongest market in terms of growth and total subscriber numbers.

DSL continues to be the most popular access technology with close to 240 million of the world’s subscribers. Cable subscriptions rates have slowed to 18 percent growth rate, while subscribers on FTTx rose 33 percent in the last year.
at July 14, 2008