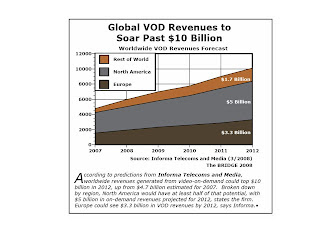 You can always count on one thing: whatever the service or application happens to be, the United States always is lagging, getting left behind, behind the curve.

Now some observers lament the U.S. lag in interactive TV. That's funny, since the U.S. market is about the most video-involved in the world. A couple of observations. Sometimes people don't use an application or service because they just don't see the value, relative to the price. Interactive TV is one of those sorts of applications.

Ask about digital video recorders and consumers vote with their wallets. Ask about over the top video and people vote with their mouse clicks. If people aren't wild about interactive TV, it probably is because it isn't compelling yet. Give people a compelling application and they'll use it. People like to vote for their favorite amateur singers or dancers.

There is no interactive TV gap. If compelling apps get developed, people will adopt them, rapidly. It's always interesting when pundits criticize consumers for not liking some app they think people should like. Give people something interesting and valuable. You won't find any gaps there.
at July 01, 2008