What's in an 8 Gbyte iPhone? 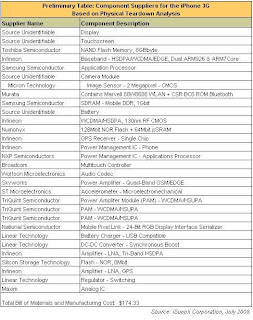 Not many iPhone owners will dissect it with the specific intent of determining all the components and estimating the manufacturing cost. But that's what iSuppli Corp. does, and did.

iSuppli estimates the 8 Gbyte version's component and manufacturing costs are $174.33, exclusive of other costs such as software development, shipping and distribution, packaging and miscellaneous accessories included with each phone.

“iSuppli believes Apple aimed for a more cost-effective design for the 3G iPhone compared to the 2G, in order to lower the retail price—which will allow the company to seed adoption and to capture maximum market share now—while the company still has buzz and a perceived differentiation relative to its competitors," says Andrew Rassweiler, principal analyst at iSuppli.

Beyond the $174.33 bill of materials and manufacturing cost of the iPhone 3G, Apple is spending an estimated $50 on intellectual property royalties for each unit shipped. With the 8Gbyte version retail-priced at $199, and the estimated $300 subsidy paid by AT&T to Apple for each unit, Apple is selling the product at a price of $499, and spending $224.33 to produce each one. This gives Apple a BOM, manufacturing and royalty margin of 55 percent for each 8Gbyte iPhone 3G unit sold.
at July 16, 2008