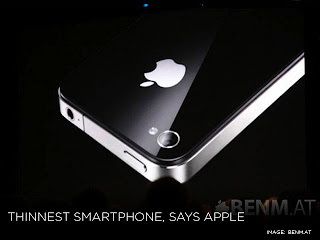 Wall Street Journal technology reviewer Walt Mossberg says the Apple iPhone 4 is "a major leap over its already-excellent predecessor, the iPhone 3GS," on both hardware and software fronts.

The iPhone 4 redesign features a radically-sharper screen; a second, front-facing camera; a larger battery; a better rear camera with flash; and a faster processor into a body that is 24 percent thinner, a bit narrower, and retains the same length and weight as its predecessor's, says Mossberg.

With the front-facing camera, and clever new software called FaceTime, Apple has brought simple, high-quality video calling to mobile phones, albeit, for now, only over Wi-Fi and only among iPhone 4 owners.

In addition, the iPhone now includes an updated operating system that adds catch-up software features such as limited multitasking; folders for grouping related apps and a unified email inbox for multiple accounts and the ability to present messages as threaded conversations.

"While its 3.5-inch screen, once considered huge, is now smaller than those on some other smartphones, the high resolution packs in a lot of material and makes text appear almost like ink on fine paper," says Mossberg.

"Voice quality was quite good, even on long speaker-phone calls, and data performance over Wi-Fi was excellent," he adds. "Video and audio streamed from the Web played smoothly."

Apple claims longer battery life for most functions—seven hours of talk time, for instance, versus five hours on the earlier model.

Some will question the degree of multitasking support, though. To prevent a drain on battery life, Apple has allowed only certain apps to fully multitask, such as Pandora or voice-prompted navigation apps, which keep working while you're on a call. Others that fully work in the background include Internet calling apps, and those that perform long downloads, he says.

"But some logical candidates, such as Twitter and Facebook, merely pause in place when you switch away from them," says Mossberg.

Apple says constant fetching of hundreds of social-networking updates in the background would kill the battery too quickly.

"In fact, for many scenarios, such as games, Apple's version of multitasking is really just fast switching among open apps that save their place," he notes.

Because iPhone users can easily accumulate hundreds of apps, it can become difficult to organize them. So the new iPhone OS now allows you to group them into folders.

"The most important downside of the iPhone 4 is that, in the U.S., it's shackled to AT&T, which not only still operates a network that has trouble connecting and maintaining calls in many cities, but now has abandoned unlimited, flat-rate data plans," he says.

In an effort to improve performance, Apple added a wrap-around antenna, and the device automatically tries to connect using the least-congested frequencies as well as frequencies with higher quality (less signal interference).

"Just as with its predecessors, I can't recommend this new iPhone for voice calling for people who experience poor AT&T reception, unless they are willing to carry a second phone on a network that works better for them," says Mossberg.

"For everyone else, however, I'd say that Apple has built a beautiful smartphone that works well, adds impressive new features and is still, overall, the best device in its class," he says.
at June 23, 2010