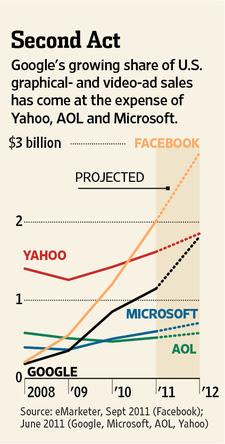 Google reported revenues of $10.58 billion for the quarter ended December 31, 2011, an increase of 25 percent compared to the fourth quarter of 2010, and a record for Google.

Some think investors are worried about the growing regulatory scrutiny Google is facing, or the implications of its ownership of Motorola Mobility.

But most executives would probably love to have such problems. Consider Google's share of display advertising, which probably will pass Yahoo early in 2012.


Long criticized as being a revenue one trick pony, Google's display ad business now amounts to about 10 percent of total revenues, which continue to be lead by search advertising.