U.S. business customers are spending less on communication services, says CMR Market Research.  From 2010 to 2014, total business services revenues for all suppliers have decreased by $6.0 billion from $110.0 billion to $104.0 billion, contracting at one percent per year.


Mobility eventually will become a growth area for cable TV providers as well, since the U.S. fixed network business services market is contracting, while the mobile segment is growing.


From 2012 to 2017, the total commercial services wireline market will contract from $95.5 billion to $92.3 billion at a CAGR of negative 0.7 percent, according to Insight Research.


Mobile commercial services, on the other hand, will grow at approximately eight percent during this period.


From 2012 to 2017, cable TV operator supplied commercial services revenue will grow from $7.6 billion to $12.3 billion at a CAGR of 10 percent, Insight Research predicts.


In the past, as much as 85 percent of the current commercial customer base for most major cable TV companies have been small companies with less than 20 employees, according to Cisco.


And for the most part, MSOs commercial customers are heavily concentrated in the below 5 employee businesses. With SMBs typically being defined as the 1-999 market, this leaves a significant portion of that market unaddressed by MSOs. 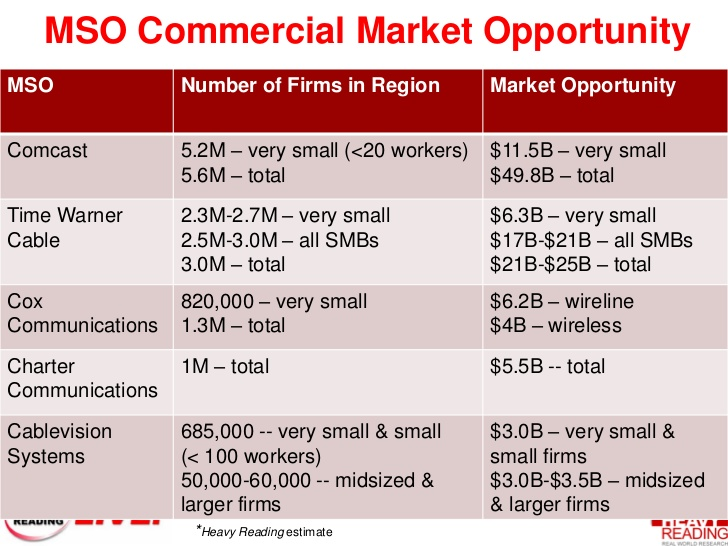