No New Revenue for 5G?

From time to time, you will hear a consultant or market researcher make a startling claim about the next generation network (fixed, mobile or wireless), namely, that there are “no new revenues" to be generated by the new network.

It is a hard claim to refute in its entirety, for some logical reasons. Telcos replacing copper access with “fiber to home” or “fiber deep into the network” already know the issue.

If a service provider has customers served by a digital subscriber line connection, and then replaces it with a fiber-to-home connection, there is a net zero change in subscription volume: one replaces the other.

One might also make the argument that there is “no net new revenue” involved, but that likely is wrong for several reasons. That might sometimes be the case.

Or consider the matter of mobile next generation networks. Did 2G represent “no net new revenue, compared to first generation analog?” In one sense, over a period of time, voice service revenue possibly decreased, as prices for mobile service dropped.

Also, over a period of time, 1G voice revenues became 2G voice revenues. Sure, it is tough to calculate net revenue changes due to the network upgrade, as opposed to market price changes, which likely were more substantial.

But 2G made text messaging possible, so eventually, incremental new revenue was generated. Also, as voice prices dropped, consumers began substituting mobile voice for fixed line voice, increasing the number of subscriptions. So, yes, a next-generation network most often does lead to higher revenue, over time.

Some might argue 5G will not lead to higher revenues, compared to 4G, or that Internet of Things will not boost revenue.


It always is difficult to fully anticipate the business value provided by each successive generation of mobile networks. There always is a stated business case, of course. From the first generation to the second, the advantage was the transition from analog to digital, with the advantages that normally represents.


The shift from 2G to 3G was supposed to be “new applications.” That eventually happened, but not right away. First mobile email and then mobile Internet access were new apps of note, though the use of mobile hotspots also was an important development.


The shift from 3G to 4G generally was said to be “more bandwidth” supporting new applications.


Video apps generally have been the most notable new apps, compared to 3G, although user experience when using the Internet also is far better with 4G. And though it often goes unnoticed, 4G speeds have allowed any number of users to substitute mobile for Internet access.


More U.S. households now seem to be abandoning even fixed Internet access in favor of mobile access, as it now is common for households to rely on mobile voice (more than 46 percent of U.S. households now are “mobile only” for voice) , instead of fixed network voice, or over the top video entertainment in place of traditional subscription services.


In fact, because of mobile use, fixed network Internet access rates actually are dropping in the United States, having reached an apparent peak in 2011. 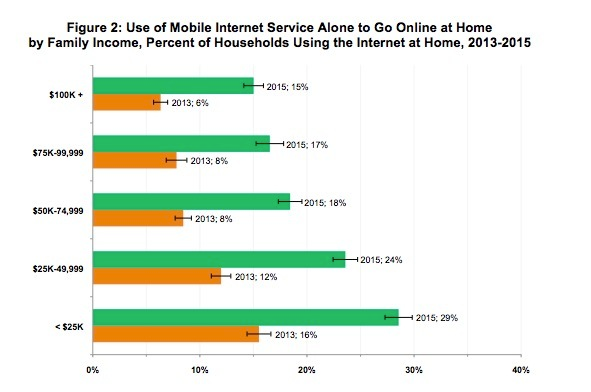 Eventually, skeptics will be proven wrong. In the early going, one might well argue that the incremental cost of running both 4G and 5G, plus the new capital investment, plus substitution effects (customers move from 4G to 5G) might not--initially--show net new revenues or earnings.

Over time, that will change, as 5G becomes the default network and customers migrate over. That, of course, means the 4G network is less-heavily loaded, and therefore drives less revenue, unless a new temporary purpose can be found for 4G that is distinct from 5G.

Eventually, the 4G network reaches end of life and is decommissioned. But there is a long period when multiple networks coexist, with evolving business models and profitability, over time.

That is not to say the discovery of new revenue models happens right away. Frequently that does not happen immediately. Some of us would argue it took some time before new apps--such as mobile email--actually became interesting new 3G apps and revenue drivers (direct or indirect).

It is too early to say, with precision, how new millimeter wave spectrum allocations around the world, to support 5G mobile networks and other applications, will increase the total supply of wireless communications bandwidth, spectrum and business models.

Some might guess that the new millimeter wave capacity will equal or exceed all prior wireless allocations yet made. There are tradeoffs: distance for capacity, generally speaking.