10% of Fixed Internet Access Customers to Weigh Mobile Substitution Over Next Year?

Mobile substitution is not a new phenomenon in the telecom business, as first consumers began using mobile for voice instead of fixed services, then over-the-top for carrier messaging, and now OTT video as a substitute for linear video subscriptions.


And though there has been speculation for decades about the ability to substitute mobile or Wi-Fi for a fixed access connection, and though some percentage of consumers actually do so, it has not been a serious choice for most consumers.


That could change, if mobile “unlimited” data usage plans remain a staple. A study by Parks Associates suggests that perhaps 10 percent of U.S. broadband households are “likely to cancel their fixed broadband service” over the next 12 months, and use wireless or mobile data services as a replacement.


The other change which may be happening is the earlier move by all four leading providers to delink consumption of OTT video from data usage charges.


“Subscribers to value-added mobile data services are substantially more likely to cancel their fixed broadband service,” said Harry Wang, Parks Associates senior director. “This suggests that the use of a mobile phone for entertainment purposes contributes to the consumer perception that they can substitute mobile for fixed-data service with little or no pain.” 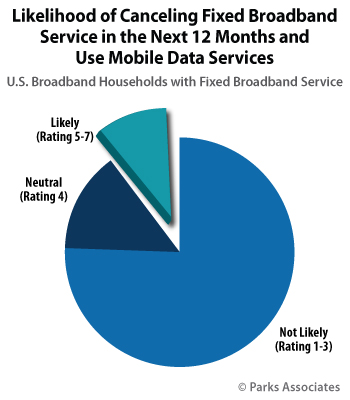