Several years ago, a number of leading suppliers in the U.S. mobile business, including AT&T and T-Mobile US, suggested caution on 5G hype, reminding observers that 4G was where most of the revenue now is generated, and also emphasizing 4G ability to extend access speeds in the future.

These days, those firms are touting earlier 5G deployment than originally was the stance, though T-Mobile US remains far more cautious than does AT&T. Sprint has been generally low-keyed about 5G as well. Verizon remains fully committed to the earliest-possible deployment of 5G, including perhaps some early "pre-5G" deployments in 2017 that could involve fixed wireless.


Any single one of those bands represents more bandwidth than AT&T presently is licensed to use for its mobile business. So 5G will represent an increase in available mobile bandwidth (as well as untethered bandwidth) ranging from 10 times to 100 times more than what presently is available. Adding small-cell architectures will boost potential usable bandwidth to perhaps 1,000 times today’s capacity.


Aside from those physical changes, it is possible, perhaps necessary, that service provider business models and revenue sources also change in major ways. As one example, it is possible or necessary that a majority of total revenue is earned from enterprise sources, not consumer accounts; from machine users, not human users.


With such huge increases in capacity, it might not be necessary to argue about access “fast lanes and slow lanes,” quality-assured, zero-rated or best-effort access, as there will be abundant capacity to support all those modes, simultaneously.


In addition to new applications enabled either by ultra-low latency or ultra-high bandwidth, or apps enabled by newly-affordable bandwidth, even other major habits, such as the tendency to rely on Wi-Fi for internet access, could change.


Conventional wisdom--and much global data--suggests that roughly 80 percent of smartphone data is delivered over Wi-Fi and 20 percent by the mobile network. The reason for that usage pattern is that consumers are rational about their spending. Offloading smartphone access to Wi-Fi lowers the amount of access they have to buy on the mobile network.


In the 5G era, that pattern might change. How much change happens depends on mobile service provider mobile data tariffs and packaging. In other words, if one assumes that “most” of the data consumption has to do with video entertainment, and if video entertainment becomes a sort of “zero incremental cost” activity, consumers might well shift much of their consumption back to the mobile network.


It would be fair to argue that unless mobile data charges (cost per gigabyte) start to resemble fixed network levels, it will be tough to shift most video from fixed to mobile delivery modes. One way mobile operators have begun to experiment with that shift is to zero rate mobile video consumption.


In the past, mobile operators mostly relied on offload to Wi-Fi to achieve those results. So the issue becomes, in an era where bandwidth might be far more abundant, whether on-network costs are so low--or equivalent to Wi-Fi access--that consumers simply will not bother to offload access to Wi-Fi. 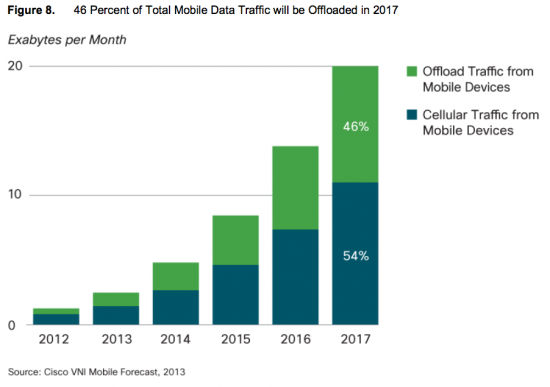 
We already can see glimmers of that behavior shift in India, where mobile data access, to the tune of four gigabytes a day, has dramatically shifted user access away from Wi-Fi, and on to the mobile network.


Since September 2016 Reliance Jio has signed up 50 million customers and has triggered a price war among India’s established mobile operators.


But Jio customers also differ from other mobile customers in India in one way: they have a very low usage of Wi-Fi connections, according to OpenSignal.


OpenSignal data from Sept. 1 to Nov. 30, 2016  (the three months in which Jio has been available), Jio users connected to Wifi networks about 8.2 percent of the time. That is well below the average of 29.8 percent of internet access time on Wi-Fi.