Does Internet Cause Growth? Maybe Not

O2 in the United Kingdom now predicts that 5G will have more economic impact than optical-fiber-based fixed internet access by 2026. In addition to £7 billion (US$8.7 billion) of direct economic value through businesses using 5G, 5G is expected to indirectly boost the nation’s productivity by an extra £3 billion (US$3.7 billion) a year, the study by independent research consultancy Development Economics suggests.

The study predicts the combined value of 4G and 5G connectivity will add £18.5 billion to the economy in less than a decade, compared to just £17.5 billion for broadband overall.

Of course, similar claims are made about economic impact of fiber to home as well, by numerous studies. Among the more-aggressive estimates, gigabit internet access, it is claimed, lifts gross domestic product by more than one percent. Most studies claim far less impact, though, mostly in the 0.2 percent to 0.3 percent increase in GDP growth.

Some studies suggest economic impact is quite limited.

There are many challenges when attempting to derive such results. Methodologically, it never is entirely clear that internet access drives economic growth, or that economic growth drives broadband demand, for example. It might be the other way around.

Demand for gigabit access might be highest in affluent neighborhoods, so that gigabit access actually has nothing to do with creating economic activity, but only reflects it. Similar arguments about causality might be made for the relationship between population growth and broadband, or wealth and broadband.

In other words, does affluence drive demand, or does internet access create affluence? It is nearly impossible to untangle. Nevertheless, policymakers, politicians and others always insist that internet access leads to growth.

Perhaps the relationship is quite a lot more nuanced. Does TV ownership, PC ownership, use of mobile phones, Wi-Fi, use of radios, refrigerators, stoves or autos cause higher economic growth, or merely reflect growth. Most of those instances likely suggest growth leads to income, which leads to  appliance usage.

It is not so clear that internet access actually is different. 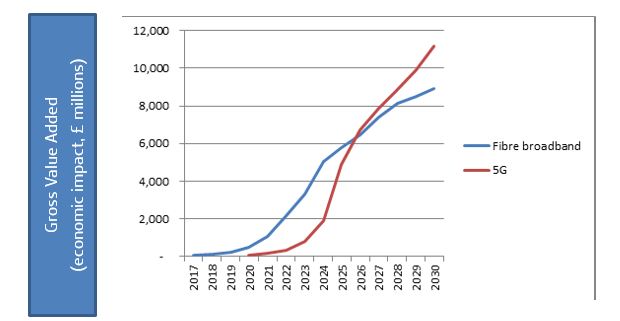