Amazon Web Services (AWS) is maintaining its dominant share of the burgeoning public cloud services market at over 40 percent, while the three main chasing cloud providers--Microsoft, Google and IBM--are gaining ground but at the expense of smaller players in the market, Synergy Research Group says.


Microsoft, Google and IBM increased their worldwide market share by nearly five percentage points over the last year and together now account for 23 percent of the total public infrastructure as a service (IaaS) and platform as a service (PaaS) market.


Synergy estimates that quarterly public cloud infrastructure service revenues (including both public IaaS and public PaaS) have now reached well over $7 billion and continue to grow at almost 50 percent per year.


The cloud providers and rankings are very different in the managed private cloud, where IBM continues to lead while Rackspace and traditional IT service providers feature more prominently than they do in public cloud. 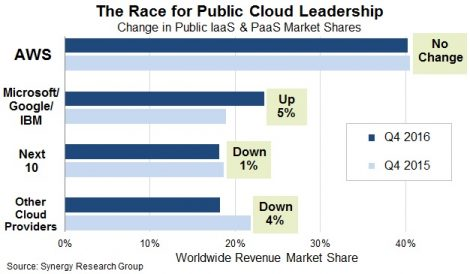