Nobody can yet  be certain what impact the apparently-escalating mobile marketing wars might have on industry revenue and profits, other than to speculate that the impact will likely will fall most on Verizon, AT&T and Sprint, while T-Mobile US might benefit.


In the Indian mobile market, embroiled in a fierce marketing war of its own, industry revenues might plummet. At the very least, slower revenue growth now is expected. In the fourth quarter of 2016, the legacy carriers might all report revenue declines. Several of the market leaders already have reported revenue declines.


So far, some expect profit margins at Verizon to suffer, but possibly less so in the revenue area, at least in part because of the Yahoo acquisition.


It probably is not surprising that there also is disagreement about the potential impact of AT&T’s new unlimited usage plan on its revenues, profits and churn rates, as some expect relatively modest  changes, while others think AT&T is more exposed to revenue hits.


That, it might be argued, is because Verizon and AT&T now suffer from greater market pressures
than had been the case over the recent years, and that most of the deterioration has happened suddenly, over just a few months early in 2017, with T-Mobile US clearly separated from the other three leading carriers (Verizon, AT&T, Sprint).


Much could depend on how long the present marketing war continues, and what additional form it might take. 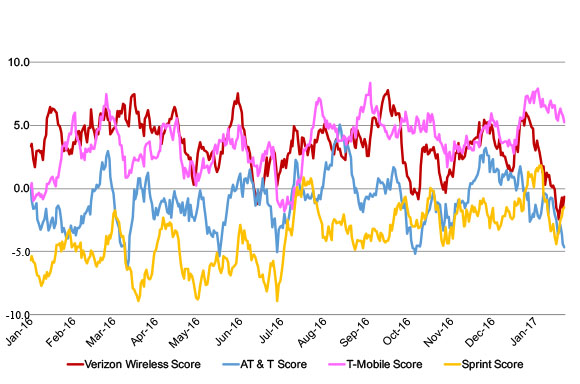