Some 60 percent of about 31 rural telcos surveyed by NTCA:The Rural Broadband Association report they are providing “wireless service” to their customers, including both mobile and fixed wireless services, using a mixture of owned spectrum and facilities as well as resale or agency agreements with mobile service providers.


Of the respondents not currently offering wireless or mobile service, some 30 percent are considering doing so. 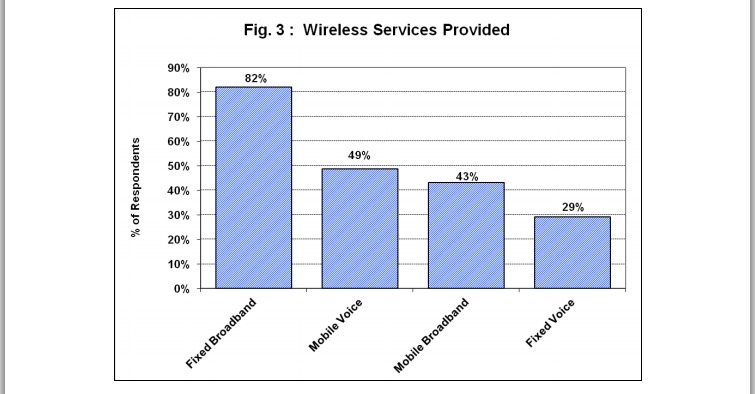 About 60 percent of independent and smaller rural U.S. telcos surveyed by NTCA:The Rural Broadband Association report they own at least one wireless license in the frequency range
below 2.3 GHz, according to NTCA.


Some 70 percent of carriers owning a license below 2.3 GHz have a 700 MHz license, 47 percent have an AWS license, 47 percent a PCS license, 13 percent some other license
(such as microwave), 11 percent cellular, six percent paging, and two percent SMR. For the most part, those are “access” frequencies.

About 28 percent of those respondents offering mobile service  resell another carrier’s service under their own brand, and 21 percent do so under a national brand. So 39 percent “resell” or have an agency agreement.
at January 16, 2014