One reason retail prices for linear video entertainment subscriptions do not fall, as do prices for virtually all other communications services, is the content nature of the product, which creates uniqueness and scarcity, which in turn props up prices.

It also appears to be true that overpricing of desired content depresses sales, especially when product alternatives are available. That, most concede, is why consumers slowly are abandoning linear video.

By now we all are familiar with the reality that the Internet wrings out cost from every industry and market it touches. We understand the principle that users increasingly view apps, content and transactions as activities that should not cost much, if they cost anything in a direct, out of pocket payment sense.


So it perhaps comes as no surprise that book publishers, now better able to set their own prices for e-book sales--and setting them higher--are finding that fewer consumers seem to be willing to pay the higher prices.


To be sure, that is what one might expect: higher prices tend to produce lower sales. For anything but a luxury good, that would not be unexpected.


To be sure, with content products there always is the subjective matter of  whether the current content resonates with buyers. Sometimes hit movies, songs or books get marketed, while at other times the products might not be so strong. It is possible that the data only reflect a lull in product desirability,  measured in terms of  consumer interest in buying. 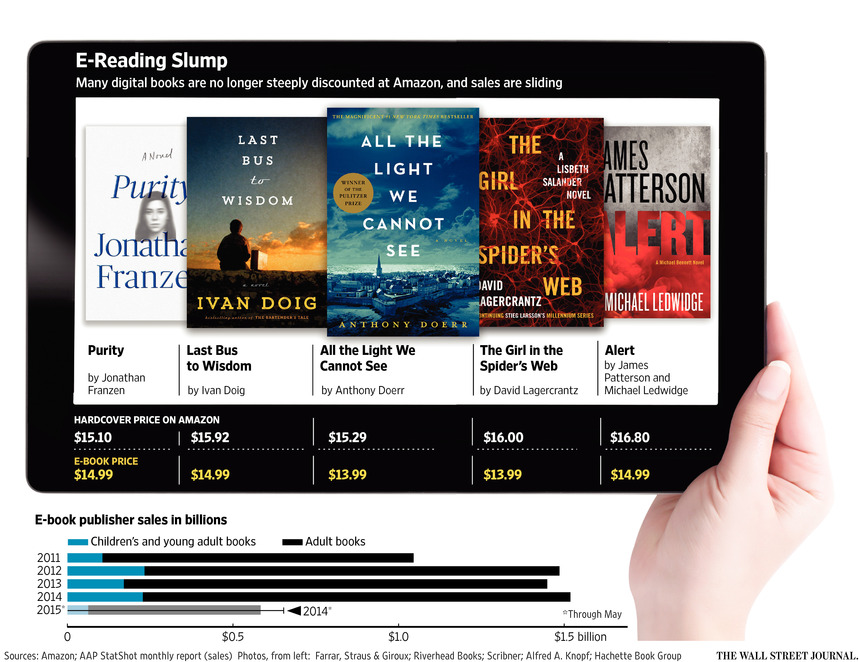 
But it might also be the case that book products, like most other content, simply faces price resistance in the digital domain, as do most other digital products.


It is tempting to speculate that, as is the case for  many other digital products, we might also be seeing a “winner takes all” sort of trend, where most of the revenue or profit is generated by a relatively few number of hit titles.


But book publishing had a “hits” dynamic before content went digital. And many would argue digital distribution enables a “longer tail” of sales of less popular titles.

The bad news for book publishers might be, though, that the Internet is simply wringing profit out of the business, as it so often does. Publishers are free to price as they like. But consumers also are free to refuse to buy.
at September 06, 2015