According to TeleGeography, median 10 gigabit per second Ethernet (10 GigE) port prices across key global transit markets decreased an average of 14 percent compounded annually between 2012 and 2015, and 22 percent in the past year.


The median 10 GigE port price in London, which serves as a critical international traffic hub for Europe, Africa, and parts of Asia, fell 16 percent compounded annually over the past four years to reach $1.00 per Mbps per month in the second quarter of  2015 and is among the lowest in the world.


Median prices in both Los Angeles and Miami, which serve as traffic hubs for Asia and Latin America respectively, fell 14 percent per year to $1.20 per Mbps per month.


Prices have fallen much less, and transit is more expensive, in regions that still are largely dependent on long-haul links to Europe or the U.S. to gain access to international connectivity.


To the extent that long haul pricing is based on distance, that pricing disparity is understandable and logical, if not welcome by buyers. 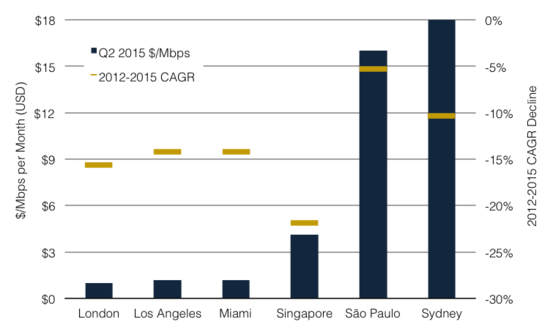 
For example, in São Paulo, where most Internet traffic is ultimately exchanged remotely in Miami, the median 10 GigE port price fell only five percent compounded annually between 2012 and 2015 to $16 per Mbps per month.


Service in Sydney, for which a significant amount of Internet traffic is exchanged in Los Angeles, costs $18 per Mbps per month for a 10 GigE port.

As content gets pushed closer to the end users, port prices should fall faster, as less distance will have to be traversed. So IP transit prices will keep falling.
at September 09, 2015