Even When They Don't Know Their Internet Access Speed, They Know When the Experience Requires More Bandwidth

Some nine percent of U.S. broadband households switched service providers in the past 12 months, according to Parks Associates.


The nine-percent churn rate is significantly less than one percent a month, a low churn rate for a consumer service, one might argue, suggesting that consumers have not been massively unhappy with their current providers and the value-price relationship.

The reasons for the churn behavior tend to boil down to a switch driven by buyer perceptions of a better price-value relationships.

About 35 percent of the changes were to get a faster service. Some 18 percent of the switchers switched providers to get the same speed at a lower price.


The study suggests that more than 25 percent of U.S. broadband households believe that their present broadband speed is faster than needed, while 10 percent plan to upgrade to a more expensive but faster service.


The study suggests 43 percent of subscribers do not know their current broadband speed. What they do seem to understand is the experience that they have online, particularly as it relates to use of digital media.


As you might guess, multi-person households sharing a connection, especially those where respondents own multiple connected entertainment devices are more likely than others to plan to upgrade their broadband service, Parks Associates says. 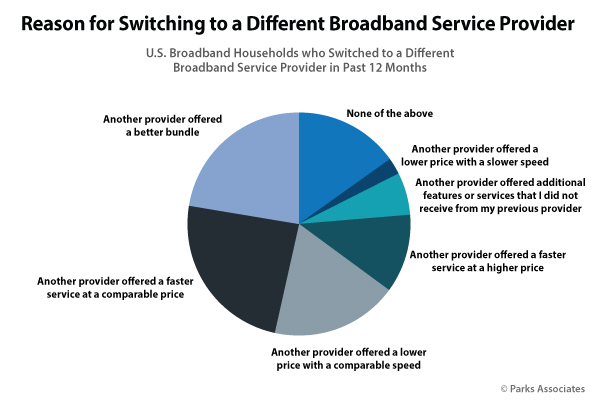