By some estimates,  4.5 billion people do not have any kind of formal credit score that could help them qualify for loans, but up to 90 percent of the world’s population does have access to mobile phones.


As it turns out, mobile phone behavior can establish a  “financial identity” that provides many of the advantages of a credit score, when entities want to make loans, typically microloans. By reducing risk of non-payment, such measures could enable loans made with smaller lending fees.


That, obviously, would help borrowers as well as lenders. Firms such as Branch (a nod to its mission of serving as a branchless bank) use phone data to assess borrower likelihood to repay on loans of $25 or less in Kenya, and mobile phones as the means to send money and receive repayments.


The app, available on Google Play, can make a loan determination and deliver a result to the mobile phone in five minutes.


Branch collects data from the potential borrower’s phone, including information about the device, text message logs, call logs, and contact lists. Branch then uses the  information to assess creditworthiness.
In some cases, the value comes from use of the phone to record spending and saving data entered manually.


In other cases, non-financial behavior can be used to create a proxy for a credit score. Kreditech says it can use 20,000 measures based on phone behavior to make an assessment. Traditional banks might use 300 measures.


In addition to new commercial microlending apps and efforts, the original impetus might have been non-profit microlending by outfits such as Kiva, which works with dozens of commercial partners.


The use of algorithms to assess risk obviously will help to cut the costs of screening, which in turn arguably contributes to the high interest rates microloans tend to feature. 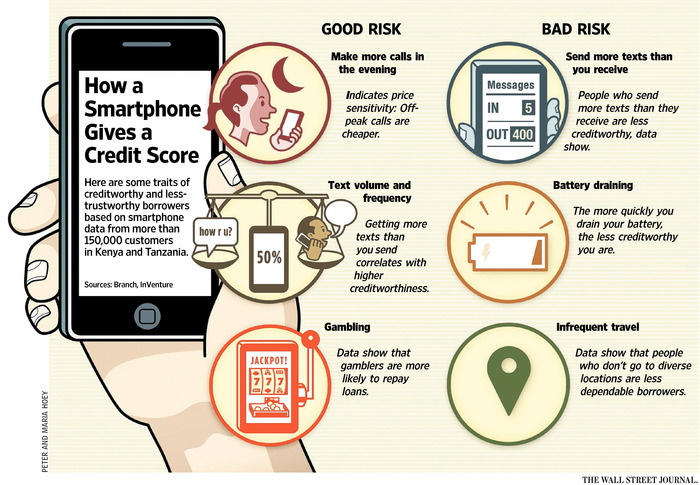