Three decades ago, had you taken a poll of telecom industry executives about whether fiber to the home would be adopted faster in Europe or the United States, you likely would have gotten more votes for Europe.


Whether one would get the same results in 2015 is a more open question. The latest study conducted by IHS suggests that VDSL continues to be the fastest-growing high speed access technology, and has been since 2013.


In 2013, says IHS, when companies in many study countries refocused their broadband deployment strategies towards upgrading existing copper networks rather than investing in fiber to the home.


Growth in overall high speed access coverage “can be primarily attributed to an increase in very-high-bit-rate digital subscriber line (VDSL) coverage, which grew by over seven percentage points in the year, reaching 37.6 percent of EU households by the end of 2014,” IHS says.


“VDSL coverage grew significantly in a number of markets,” Fellenbaum said. “Most significant increases were recorded in Denmark, Austria, and Iceland, all reporting increases in VDSL coverage exceeding 30 percentage points.”


Fiber to the home also increased, of course. At present, FTTH is available to about 18.7 percent of European households.


The strongest growth in FTTH in 2014,  coverage compared to 2013, was recorded in Portugal and Spain, where FTTH coverage increased by 16.1 and 22.1 percentage points respectively, reaching 65.8 percent of Portuguese and 44.8 percent of Spanish homes.


Technology Futures suggests some 60 percent of U.S. homes will have access at a minimum of 100 Mbps by about 2020. The difference in markets is that many of those homes will be served by cable TV operators using the new DOCSIS 3.1 standard, able to supply a gigabit over hybrid fiber coax networks.


Telcos and independent Internet service providers will have to switch to fiber to the home to reach such speeds, for the most part, as copper loops in the United States generally are too long to support VDSL at a gigabit.


Long Term Evolution coverage also is increasing rapidly. At the end of 2014, 4G LTE mobile broadband was available to 79.4 percent of EU households, a 20 percentage point increase compared to 2013 and the fastest growing of the followed technologies.


Fixed broadband coverage remained the same as in 2013 at 97 percent.


At 89.6 percent, rural fixed broadband coverage also stayed at its 2013 level, but availability of NGA technologies in rural areas increased from 18.1 percent in 2013 to 25.1 percent of rural homes passed by high-speed networks in 2014, according to the
EC Digital Agenda Scoreboard 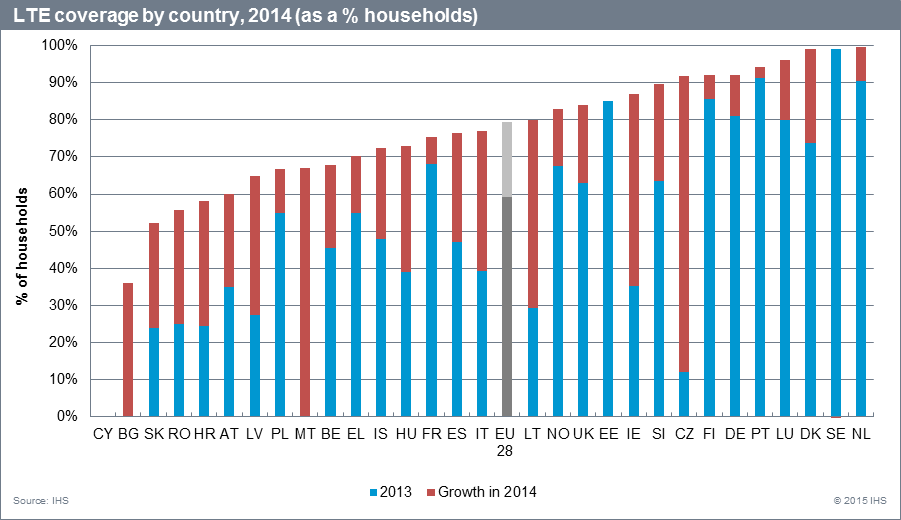