Consumer interest in “home automation”  is “quickly losing steam,” Argus Insights reports. “In fact, year over year slowdown in growth is clear indication that the home automation market is stalling and may be contracting.”


In May 2015 consumer demand for connected home devices such as thermostats, light bulbs, locks, sensors and cameras experienced its first drop in interest, year over year, a sign that consumer interest is stagnating, Argus Insights says.


In May 2015, consumer interest in home automation fell 15 percent, compared to the year ago May readings.


While interest in security cameras consistently generate the most interest, they are also suffering a significant drop in demand compared to 2014.


The Argus Insights’ analysis of over 12,000 consumer reviews of security cameras from February to May 2015 discloses major negative issues such as persistent problems with reliability as well as trouble with connectivity.


In addition, set up was said to be “frustrating and time-consuming.”


“Until things become easier and consumers don’t have to cobble together a total solution, I believe we will continue to see this stagnation continuing for the rest of 2015 unless a new offering addresses these issues and revitalizes the market,” said John Feland, Argus CEO


Consumers are unsure what products they want or need while first adopters have already made their purchases, Feland said.


The Google investments in Nest and Dropcam and Samsung acquisitions in home automation are not growing at the rate expected from such acquisitions, while the  overall connected home device market is shrinking, he argues.


To be sure, it would not be unusual for any important new product category to take as long as a decade or more to establish itself clearly. In fact, adoption cycles can be rather lengthy, from the standpoint of any small company.


Broadcast television took more than 11 years to reach 10 percent adoption, about the same for the mobile phone.


Perhaps more important, it took 39 more years for telephone service to grow beyond 10-percent adoption and reach 40 percent of U.S. households, 15 additional years for electricity to grow from 10 percent to 40 percent usel.


The personal computer took about 14 years to reach a similar 40 percent penetration.


Similar trends  can be noted for use of bank automated teller machines, for example.


Consider smartphones, which many rightly consider to be among the faster-growing devices of all time. But it took time for even that market to develop.


The IBM Simon, with its rudimentary touch screen, was launched in 1993. It didn’t catch on.


About 2002, personal digital assistants started to have the ability to make and receive phone calls. They aren’t used anymore.


RIM shipped its first BlackBerry about 2002 as well, and RIM has largely failed.


In late 2006 only 715,000 smartphones were sold, though, representing just six percent of U.S. mobile phone sales. Up to that point, the smartphone was spreading not much faster than personal computers had done, according to Technology Review.


The point is  that It took landline telephones about 45 years to get from five percent to 50 percent penetration among U.S. households, and mobile phones took around seven years to reach a similar proportion of consumers.


Smartphones grew from five percent to 40 percent in about four years.


The point: even highly-significant consumer products can take a decade to reach 50 percent adoption. Early sluggishness is not unusual at all. 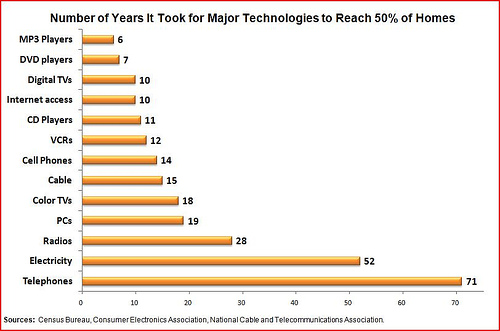