Just a few years ago, only service providers in some developed regions were confronting flat to negative revenue growth as high-margin legacy services dwindled. Today, the problem is spreading to a wider range of countries. Consider the situation faced by Philippine Long Distance Telephone Company in the Philippines.


The company operates in a wireless and fixed line segment, and had flat revenue  in the first quarter of 2015, with mobile service (Smart and Sun Cellular) revenues down four percent, while fixed network revenues climbed about one percent.


The good news is that “next generation” services grew. In the fixed network business, broadband revenues already account for 47 percent of total fixed line data revenues.


Data center revenues were up by 23 percent in the quarter.

So PLDT is in a race, as are service providers in many developed nations. PLDT and other service providers have to grow new revenue sources at least as fast as legacy revenue decay. PLDT does have one advantage, though. It can rely on mobile data revenue, as smartphone adoption in the Philippines is low, only about 15 percent to 20 percent of the population owning a smartphone. In 2014, some 80 percent of Malaysian mobile users and 49 percent of Thai mobile users had smartphones. 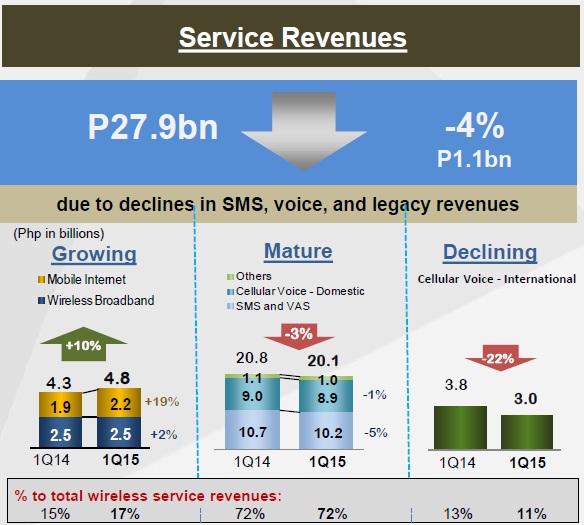