Reliance Communications (RCOM) and Russian conglomerate Sistema are in talks to merge their Indian telecom businesses, a move many would guess will occur on a wider scale as the mobile industry in India consolidates to a more sustainable number of providers.


The fragmented Indian mobile market, many would argue, must consolidate to fewer providers to create a sustainable market structure based on actual profits.


The Indian mobile market will consolidate from about 10 contestants to six in the wake of the recent spectrum auction, says Fitch Ratings, while consumer prices are likely to rise.


“We believe that telcos are likely to raise prices in response to high spectrum prices,” said Fitch Ratings. Also, “most telcos will report negative free cash flow in 2015 as they need to pay a quarter of the committed amount up front.”


The consolidation will happen because spectrum acquisitions will put pressure on balance sheets and cash flow, limiting ability to invest in networks and compete.


The consumer price hikes will occur because the operators have to pay for the spectrum. And much of the acquired spectrum was re-acquired only to support existing operations.


India's spectrum auction raised US$17.7 billion, a sum that now will have to be raised or shifted from other uses, and will prove too heavy a burden for some contestants, Fitch believes.


Idea Cellular committed US$4.9 billion, while Reliance spent  US$693 million.


Bharti now has the best spectrum assets with its ownership of about 40 percent of the 900 MHz spectrum considered best for coverage, Fitch says.


Communication markets do not seem to conform very well to market share patterns one tends to see in many other industries where market entry is less capital intensive.


Mobile service provider markets do not conform to the pattern. That is because, many could easily argue, mass market communications tends to be an oligopoly, not a monopoly or highly contested market with few barriers to entry.


One might argue that a coming wave of U.K. industry consolidation could lead to a more traditional industry structure. That also could happen in the French mobile market, which still in 2012 had an “uncharacteristic” structure. 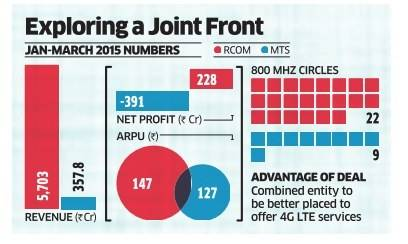