Amazon Web Services (AWS), Microsoft, IBM and Google combined control well over half of the worldwide cloud infrastructure service market, and are growing briskly. Google’s cloud infrastructure grew at a 162 percent annual rate, while Microsoft’s cloud services business grew at a 100-percent rate, from the second quarter of 2015 to the second quarter of 2016, according to Synergy Research Group.


In aggregate the big four grew their cloud infrastructure service revenues 68 percent in the second quarter of 2016, while the next 20 largest cloud providers grew by 41 percent and all other smaller providers grew by 27 percent.


The market as a whole grew by 51 percent. Amazon’s business is almost three times the size of its nearest competitor and has a clear lead in all major regions and most segments of the market. 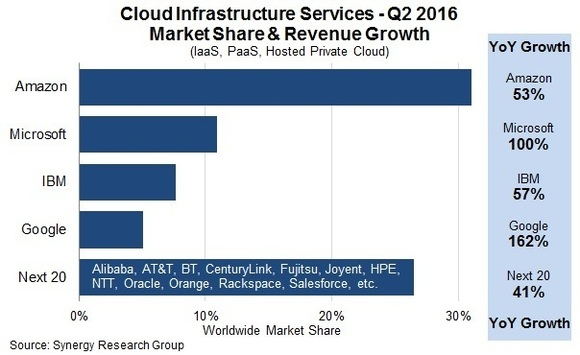