If, as expected, millimeter wave small cells have a transmission radius of about 50 meters (165 feet) to 200 meters (perhaps a tenth of a mile), it is easy to predict that an unusually-dense backhaul network will have to be built (by mobile network standards).


In the past, mobile operators have only required backhaul to macrocells to towers spaced many miles apart. All that changes with new small cell networks built using millimeter wave spectrum (either for 5G mobile or fixed use, or for ISP fixed access).

As a rough approximation, think of a small cell, in a dense deployment area, spaced at roughly every other street light, up to small cells spaced at about every fourth light pole.

In all cases, there are potential business model costs in the backhaul and small cell transmission network that exceed anything engineers have had to design, yet. That is why ots of people now are asking very-practical questions about millimeter wave spectrum and its potential impact on access network business models.

People want to know how far signals will reach, how much rain or snow will affect signal levels, how signals will bend or otherwise get around line of sight issues and how backhaul will be provided.

Impact on the business model for existing and new Internet service providers lies at the heart of those questions. And those are important questions.

With some 29 GHz of new spectrum for communications set for release by the Federal Communications Commission (including 7 GHz or more of unlicensed spectrum, spectrum sharing set to add additional spectrum in the 3.5-GHz band, there are potentially-disruptive changes in network costs, revenues and competition in the works.

What remains unknown is how much propagation distances might change as 28 GHZ is adapted for small cell network architectures, instead of point-to-point links. In an earlier period, reach of 1.5 miles was routine for point-to-point links, and distances up to three to five miles sometimes were possible.

In a new small cell deployment, transmitting at lower power, distances of 1,000 meters (about 0.6 miles) might be possible. Others think reasonable distances will more likely be in the 50 meters to 200 meters range.

Potential bandwidth is among the key differences between bandwidth in the below-6 GHz frequency bands and those millimeter bands in the 24-GHz and higher bands.

Simply, compared to 2-GHz (mobile) or 3.5-GHz signals, potential bandwidth is from five times to an order of magnitude higher. The trade-off is propagation distance.

The bandwidth differences are based on frequency itself: Basically, the waves oscillate between their high and low states much more often as frequency increases. And, in principle, every oscillation is the foundation for representing a physical bit.

On the other hand, as frequency increases, the waves start to act more like particles, in a sense, and are affected by physical objects, which stop them, and by oxygen and moisture in the atmosphere, which absorb them.

Those trade-offs mean it is not easy to model the potential business impact of abundant millimeter wave spectrum on business models. 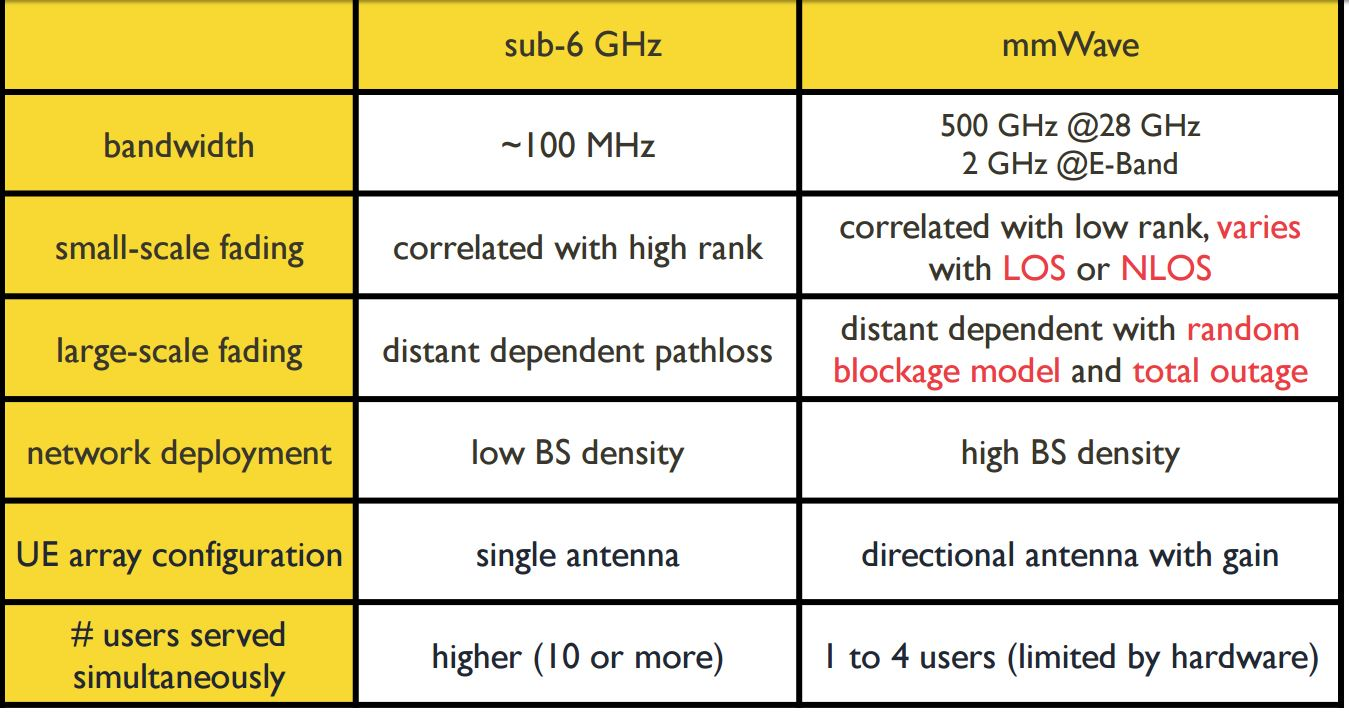 Professor Robert Heath, Jr.
“The beauty of these frequencies is that the new bandwidth they make available is tremendously large,” said Alpaslan Demir, InterDigital principal engineer. “You are talking about Mbps or multiples of- 100 Mbps bandwidths, with up to 2 GHz bandwidths, or multiples of 2 GHz, especially at 70 GHz.”

“The definition of capacity should not be limited to bps/Hz but it should involve space as another dimension,” he also argues. “For example, if there are 50 links deployed over one sq km, each with 10 Gbps over 2 GHz channel bandwidth, then the total capacity can be defined as 500 Gbps/sq km.”

Also, in the U.S. market, 7 GHz of unlicensed spectrum will be released, with obvious impact on the cost of such an access network.

The business model issues, aside from the new small cell radio network, is the requirement for some sort of "fiber to the light pole" backhaul network. It doesn't have to be optical fiber as the physical medium, but tht's the right sort of thinking about the density of a millimeter wave access network backhaul requirement.

As always, cost and revenue will get a hard look. In fact, the ability for a mobile operator to create a new fixed Internet access business--using the same infrastructure required to support mobility services--is one major reason fixed access likely will be a key feature of 5G mobile networks.

New revenue is required to pay for the new dense small cell networks, and cannibalizing fixed Internet access might be one way of doing so.
at August 15, 2016