One obvious question about the new Verizon “One Talk” service, a unified communications offer that, among other things, forwards landline calls to mobiles, is whether Verizon can take significant share from other existing providers such as 8x8, RingCentral, Vonage or West, for example.

One other obvious question is why the new offer, and why now. And a high level, the issue is that Verizon now is mostly a mobile services company, with a declining business customer base.

A new business phone service heavily based on the mobile network suits Verizon more than a number of other providers.

At the same time, if hosted PBX is a business Verizon really wants to be in, it has to make moves to gain market share. While Verizon is not an “also ran,” neither is it in the top ranks of the business, based on seat licenses.


To some extent, the offer also aims to provide a solution small businesses say they want. Some 29 percent of small businesses surveyed by Software Advice want a phone system that forwards calls to alternate devices.


That survey also found that small businesses tend to rely more heavily on mobile devices than on other kinds of phone system endpoints such as softphones and traditional desk phones.

The price for One Talk is typically $25 per month per user, but customers also need to buy new IP desk phones.

Of course, there are other potential savings, for any business considering a full installation or replacement of a premises phone system.

Factoring in hardware costs (the hardware itself, plus the installation), along with the wiring and the man-hours to run and terminate all those cables, plus the new phones to work with the system you’ve bought, you’re looking at costs between $500 and $800 per user, says John Macrio, Edgewater Networks VP.


If much of the cost now is the cost of buying a switch, and wiring or rewiring a location, then the attraction of a mobile-based offer is clear: no switch, no wiring.


Adding the Verizon One Talk dialer to a certified device (e.g., Samsung Galaxy S6 or Galaxy S6 edge at launch) with no shared endpoints on the same mobile line, costs $15 a month.

The Auto Receptionist and Hunt Group numbers are $20 each month (buyers get one feature free of each) per business account. Each additional number is $20 is month.

The Software Advice survey confirmed that small businesses rely on auto-attendant features, so the auto receptionist feature offered by Verizon is significant.


Looking only at the number of seat licenses sold, in 2016 the market leaders were RingCentral, 8x8 and Vonage. 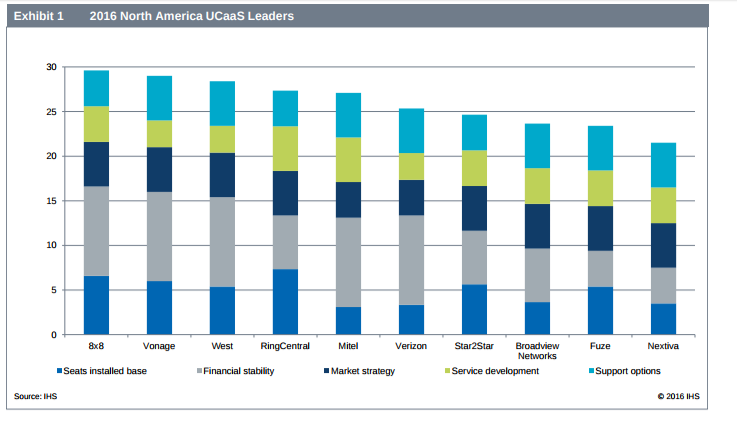