As many expected, the European Commission has blocked the $15 billion merger of the U.K.’s Three and O2, At the heart of the concern is the belief that a minimum of four mobile operators are required to sustain robust competition in a market.


According to the Commission, the O2-Three merger would have led to less choice and higher prices for consumers, by reducing the number of network-owning operators from four to three.


Looking at mobile market structure, a report by the Organization for Economic Cooperation and Development notes that the “most significant” of constraints are the limited amount of spectrum and substantial economies of scale in building network facilities.


The mobile communication sector is characterised by a number of factors that significantly influence market structure, OECD says.


The most significant of these are constraints due to the limited amount of radio spectrum available and substantial economies of scale in building network facilities.


But it has to be noted: all such determinations are founded in present business models built on use of scarce licensed spectrum. But the ability to use “scarce” spectrum is dictated by interference control mechanisms that can be more efficiently designed.


In other words, existing frameworks are inefficient because they allocate spectrum on an exclusive basis, even when the primary licensee is not using a resource. Allowing spectrum sharing would dramatically increase the amount of usable spectrum, presumably changes the economics of operating a mobile business.


The point is that the long-term mobile market structure could change radically if spectrum cost constraints are altered.


The issue now is whether another company might emerge as a buyer for O2’s assets, as owner Telefonica wants to exit the U.K. market. Liberty Global, for example, is expected to enter the mobile business in virtually all of its European markets, and already had said it would consider buying any spectrum divested in the wake of a successful O2-Three merger. 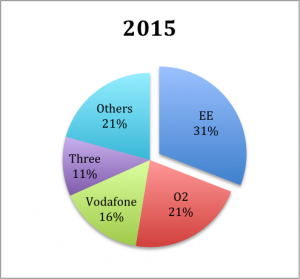 
“We had strong concerns that consumers would have had less choice finding a mobile package that suits their needs and paid more than without the deal,” said Margrethe Vestager, EU competition minister. “It would also have hampered innovation and the development of network infrastructure in the UK.”


At least in part, the decision was justified on the grounds that a merger would have been bad for mobile virtual network operators.


The Commission noted that the combined operation would have had a market share of over 40%, and would have had less incentive than its constituent parts to compete with rivals Vodafone and EE.