AT&T’s acquisition of DirecTV was not universally acclaimed when it happened. Some observers said AT&T needed to spend the money on better internet access. Others pointed out that the linear video business already was in decline.


Supporters argued that the move made AT&T a nationwide quadruple play supplier for the very first time. Others pointed out that the free cash flow almost singlehandedly would fund AT&T’s dividend for some time. Some added that the additional scale would improve economics for the firm’s video business now, while creating a much-stronger platform for OTT video to come.


So the new way to reassess that particular choice is whether you think AT&T or Verizon is in a better position, today, strategically.


If you believe all access providers will have to replace half of current revenues within 10 years, the only question is how to do so. In principle, you can make horizontal or vertical acquisitions, invest in new lines of business or grow organically.


Organic growth helps. How much that can help depends on whether a firm can take market share in a market or mostly has to defend its share, whether the markets are mature or young.


An attacking firm with low share always can grow by taking market share from incumbents. New entrants with different cost structures, attacking from “outside” an industry, with different assets, often have a much-easier time than incumbents attacking each other, with the same asset bases.


But most observers would argue that organic growth, in markets that are saturated, does not provide the scale of new revenue, fast enough.


And some critics might say AT&T faces issues with its DirecTV performance, in the form of subscriber losses in linear video. But the DirecTV Now OTT service, despite some issues, seems to have kept the video base at flat levels, in a business that is shrinking.


Average revenue per user is an issue, but AT&T seems to be reaping bundling rewards.


“Half of our DTV Now subscribers are coming from traditional pay-TV, mainly from our competitors, and the other half had no pay-TV service at all,” said John J. Stephens, AT&T CFO.


AT&T has “reached nearly 0.5 million subscribers,” keeping This has the video account base “essentially flat” from year ago levels, he said. 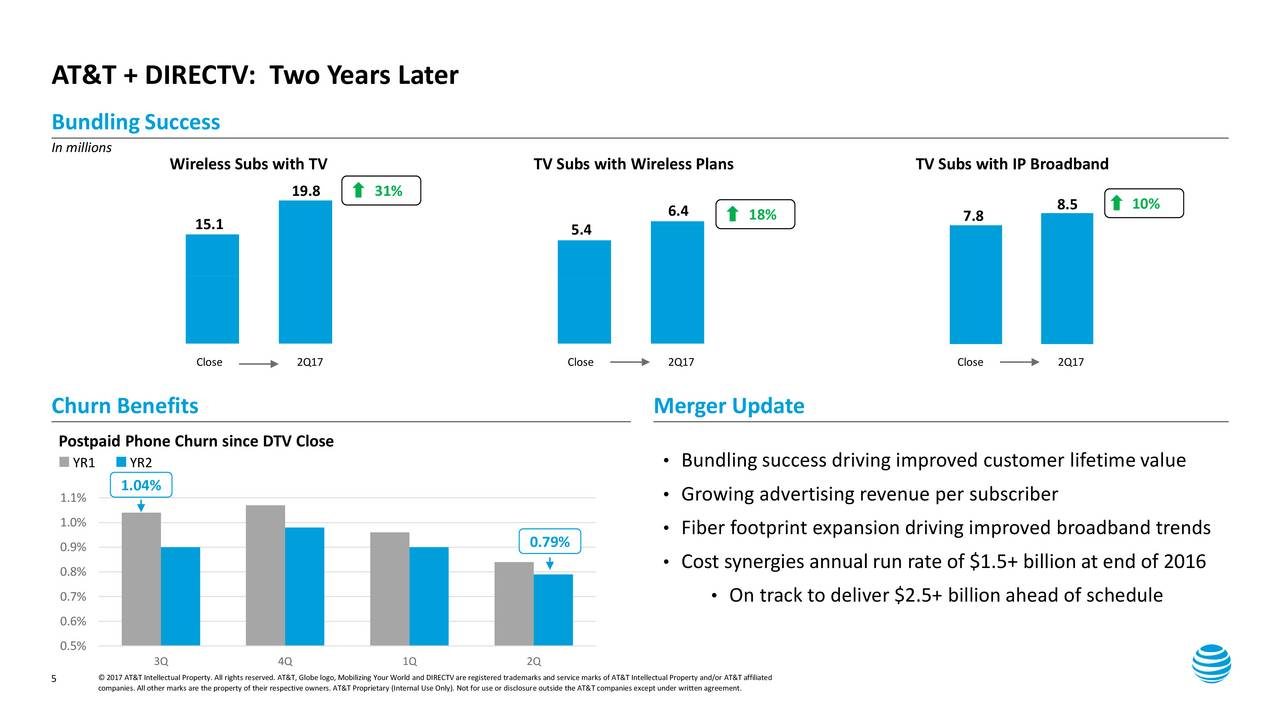 
Importantly, the bundling of video and mobile services seems to be working. The number of wireless subscribers who also have a TV service from us has increased by more than 4 million, or up 31%, since the close of the DTV deal. Conversely, TV subscribers with wireless plans have increased by nearly 1 million, or 18%.


The number of DTV subscribers in AT&T’s wireline footprint with IP broadband has grown by more than 2.7 million, to 67 percent of DIRECTV customers, said Stephens.
at July 27, 2017