IoT: Billions of New Connections by 2020

The total number of IoT connected devices (not including wearables) is expected to grow from 1.6B in 2014 to anywhere between 20B (conservative view) and 46B (disruptive view) by 2020, according to Bell Labs.


Of this total, mobile IoT devices will be between 1.6 billion and 4.6 billion in 2020. Despite this massive adoption and traffic growth of 50 to 70 times from 2014 levels, traffic load is not the issue. All traffic generated by IoT devices will only account for two percent of the total mobile traffic by 2020.


In contrast, the signaling requirements will be significant. A typical IoT device may need 2,500
transactions or connections to consume 1 MB of data.  In the disruptive view, daily network connections due to mobile IoT devices will grow by 16 times to 135-fold by 2020 and will represent three times the number of connections initiated by human-generated traffic. 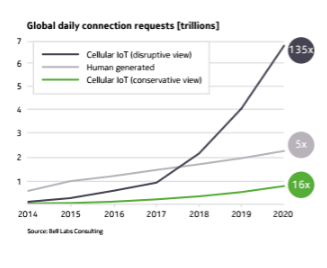