We are 5 Years Past "Peak Mobile"

We now are five years past “peak revenue” for the global mobile business, some would argue.

Virtually all analysts who follow revenue and profit trends in the global telecom business will agree that, despite growth in some regions, at a global level revenue and revenue growth have become key issues. Indeed, revenue is the paramount industry issue, heading into the 5G era.

The signs are quite evident. Operator average revenue per user is declining, globally.

Competition is one reason. Over the top product substitution is another source of pressure. Regulatory intervention such as caps on retail and wholesale voice and data charges and on mobile termination rates also are an issue. 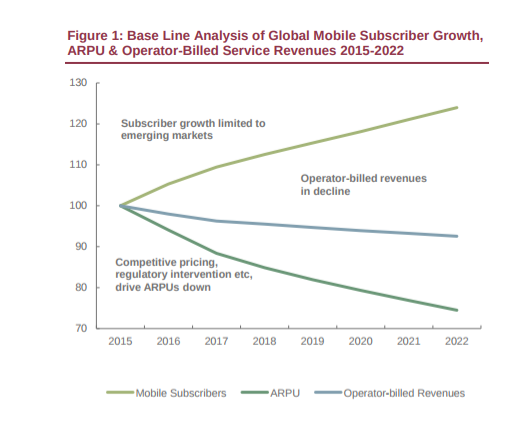 There are other issues, though. As always seems to be the case, later users tend to spend less than earlier adopters. That puts pressure on overall ARPU.

The decline in certain regions is exaggerated because of the depreciation of local currency bundles against the dollar (eg in Latin America and Europe) as well.

Using 2015 as a  baseline, Juniper argues that while subscribers are expected to increase by 1.24 times their 2015 value by 2022, over the same period global ARPU is expected to fall to less than 75 percent of its 2015 value.

Total revenue--not just ARPU--also is declining. Using 2012 (the year revenues peaked) as the baseline, by 2016 alone revenues have fallen to just 88 percent of peak values.

Also, mobile  operator revenues from international mobile roaming are expected to experience an 11% decline in 2017  in key markets including Europe, North America and Asia, Juniper argues.

The point is that we now are past the peak of the human-driven mobile services product life cycle.