Though of course we might all be wrong, and enterprise managers with us, enterprise internet of things almost uniformly believe IoT will improve service operations, increase visibility into operations, enable new business models, and create new product and service offerings.


Boeing workers now use IoT wearables and augmented-reality tools on wiring-harness assembly lines, which has resulted in up to 25 percent improvement in productivity, McKInsey reports.


Some 98 percent of executives surveyed by McKinsey reported that most companies within their industry include enterprise IoT initiatives in their strategic road maps.


Also, 92 percent of survey respondents believed IoT would have a positive impact over the next three years, either by improving operations or by allowing companies to develop new products with embedded IoT capabilities.


Some 62 percent of respondents believe that enterprise IoT’s impact will either be very high or transformative.


But just 48 percent said that company leaders either strongly supported or were directly engaged in IoT initiatives.


When asked which department would benefit most, 40 percent of survey respondents cited service operations and 30 percent chose manufacturing.


For service operations, respondents believed that enterprise IoT would produce the most value in three areas: diagnostics and prognostics, predictive maintenance, and monitoring and inspection.


In manufacturing, the top use cases were resource and process optimization (for instance, improving yield, throughput, or energy consumption), asset utilization, and quality management. 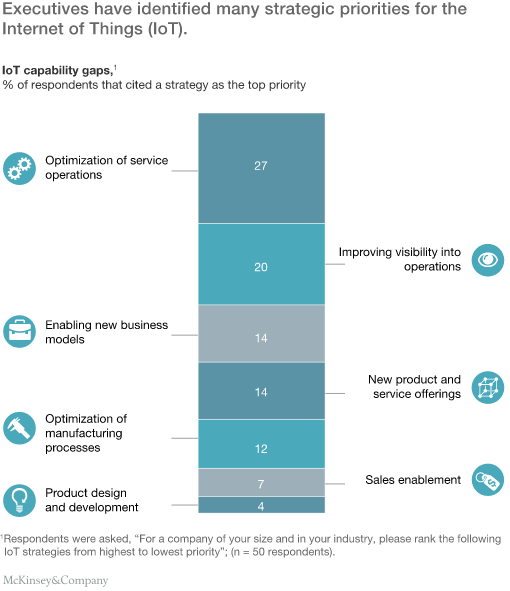