Mobile machine to machine (M2M) connections are set to reach over 450 million by 2018, according to ABI Research. That likely will be important for mobile service providers anxious to drive revenue and connection growth once sales to people saturates.


Other analysts have M2M forecasts in the same general range. Juniper Research, for example, a year ago forecast 400 million M2M connections in service by about 2017.


In the United States, The mobile M2M market will reach 114.7 million connections by 2016 with a compound annual growth rate of over 36 percent.


The largest business-to-business vertical market (most of the revenue likely will be B2B, some would argue) is the transportation vertical, with over 40 percent market share. 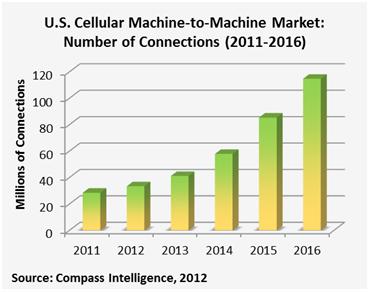 
M2M average revenue per user connection ARPUs frequently are much lower than for human communications accounts, and ABI Research says competition is putting even more pressure on ARPU.


ABI Research also suggests that the cost of M2M transponders is one reason for the heavier reliance on 2G networks, even though it also is true many M2M apps do not require lots of bandwidth.


As with many other communication services, much of the potential revenue will be earned by providers of apps and services other than the basic connections.
at July 29, 2013