Another Way of Looking at Communications Industry Disruption 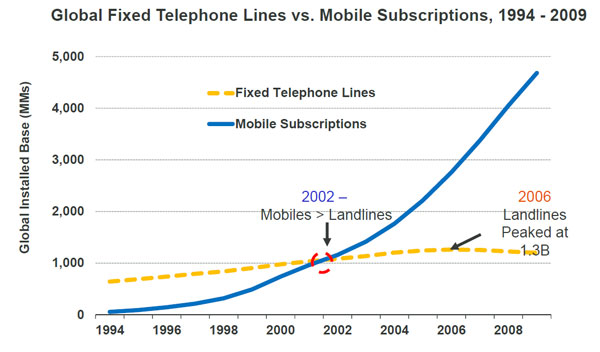 If you ponder a list of 25 consumer-facing experiences made marginalized or made obsolete over the last few decades, you will notice how many touch the communications and content consumption businesses directly. In other cases, the communications business is affected indirectly. And make no mistake, being made “obsolete” is a disruption.


Even in markets traditionally higher “unserved” in terms of widespread voice communications, mobile has revolutionized communications.


One corollary, given that almost everybody has a mobile, is that demand for public pay phones has diminished as well.


Also, at least within domestic markets, long distance charges are not a relevant concept. In international calling markets, VoIP services have made global calling generally affordable, as this look at Canadian long distance price trends shows.

These days, people do not call 411 for information, they look it up on their smart phones. LIkewise, that has affected the ways use phone books, directories and encyclopedias. Use of paper maps likewise has diminished, because it increasingly is unnecessary to rely on anything other than a smart phone for such purposes.


For the same reason, sales and use of stand-alone GPS devices has declined. One might also point to alarm clocks as a device made often unnecessary because the phone provides the same function.


The finding and publishing of most forms of information also has shifted to Internet delivery, often enhanced by location information. Consider newspaper classified ads.


That change in “search” is part of a shift to computer-enabled information processes, including storage. And in the storage area, floppy disks and compact discs (and increasingly, hard disks) have been replaced by cloud storage or solid state memory. Likewise, videocassette recorders and facsimile machines no longer are widely used.


Add the process of manually “backing up your data,” which is something cloud storage automates.

The point is how much the communications business, content consumption and now computing businesses have been disrupted, and are being disrupted by Internet technology, and how relatively rapidly those changes have happened.
at July 27, 2013