Fiber to Home Reaches 15% of Broadband Lines in OECD Countries

Fiber to home deployments have reached nearly 15 percent of fixed broadband connections at the end of December 2012, representing some 48.7 million connections, according to the Organization for Economic Cooperation and Development.

Fiber deployments  grew by 12.7 percent  in 2012, four times as much as fixed broadband at 3.27 percent, the study suggests.
Luxembourg (324 percent), Austria (194 percent), Turkey (170 percent) and Switzerland (150 percent) had the strongest annual growth in fiber connections, while seven countries had growth rates above 100 percent year over year and 11 countries had growth rates higher than 50 percent, according to the Organization for Economic Cooperation and Development.

The total number of wireless broadband subscriptions in the OECD area is just above 780 million. 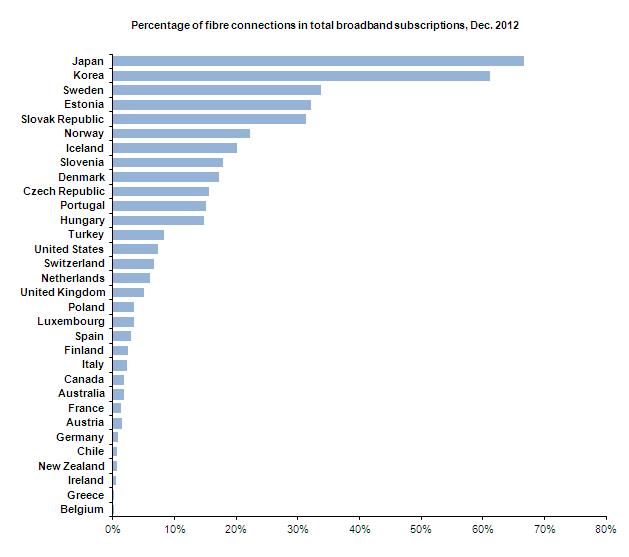 Separately, the OECD says fixed networks have, in effect, become the backhaul for mobile and wireless devices with some studies claiming that 80 percent of data used on mobile devices is received using Wi‑Fi connections to fixed networks.

For that reason, communications policy makers and regulators need to ensure there is enough backhaul for for wireless networks, especially if there is insufficient fixed access network competition.
at July 18, 2013