Will Regulators Allow Consolidation Wave to Begin in Europe? 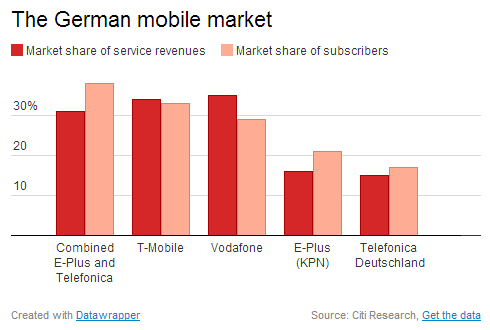 An important test of regulator will to allow significant consolidation in the European Union telecom business is about to begin.


KPN has agreed to sell its German operation E-Plus to Telefonica Deutschland, in an 8.1 billion euros ($11 billion) deal that has to be approved by European Commission authorities.


If approved, Telefonica Deutschland would have 30 percent mobile market share. Deutsche Telekom and Vodafone each would have 35 percent share.


Equally important, regulator approval undoubtedly will stimulate additional deals. An important matter is the number of major providers in each market, as some national regulators have insisted that four is the minimum number of providers necessary for competition. The Telefonica Deutschland deal obviously would reduce the number of strong national mobile players in Germany to three.


In recent deals such as in Austria where operators sought to take markets from four to three players, regulators have demanded concessions such as spectrum divestments and pledges to offer competitive wholesale access to rivals.


So approval is by no means assured. But KPN’s competitive situation in Germany illustrates the importance of spectrum and customer assets, as KPN trails its other competitors in that respect. Simply, KPN’s operation is too small.


As of the end of March 2013, E-Plus (KPN) and Telefónica Germany had a combined 43.3 million mobile customers in Germany.


What really seems to matter is the number of postpaid customers, since the average revenue per user for a postpaid account is so much higher than a prepaid account.