What is Impact of Early Device Upgrade Plans? 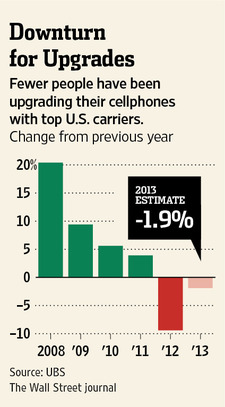 The competitive impact of new device upgrade plans launched by T-Mobile USA, AT&T and Verizon Wireless is hard to determine at the moment. T-Mobile USA might have hoped its plan would not soon be copied by the other leading national service providers, but with the exception of Sprint, the competitive response came quickly.

Also, there are signs that consumers are upgrading their devices more slowly than they had been doing in the past several years.

According to analysts at UBS, replacement rates actually turned negative in 2012, when device upgrades dropped about nine percent, year over year.

UBS predicts upgrades will fall again in 2013. So it is unclear how much demand exists for more-rapid upgrade cycles on smart phones. In principle, the new plans allow for upgrades as often as every six months to a year, depending on the service provider and the payment plans subscribers choose.

Nor is it entirely clear whether handset subsidies are “good” or “bad” for consumers who choose to buy service plans featuring bundled devices.

A study by the Organization for Economic Cooperation and Development suggests the advantages of unbundled device plans are somewhat nuanced and subtle.

For those countries where both bundled and “bring your own device” options exist, such as in France or the United States, the report concludes that the bundled option (with discounted smartphone) was, on average, between $10 and $20 a month more expensive than the BYOD option.

“This is not unexpected,”  a new OECD report shows. When service providers bundle or subsidize a device over time, they essentially are loaning the customer money. The difference in cost over three years essentially represents the cost of credit.

There are other consumer advantages, but they are a bit subtle. Unbundled phone sales can have a positive impact on both consumers and the ecosystem that exists around smartphones, the report suggests, in the area of price transparency, for example.

But the report also concludes that, in broad terms, service pricing is only slightly affected by the presence of bundled discounts for popular smart phones.

On the other hand, in many cases, consumers possibly pay higher costs over three years, when purchasing a device that is bundled with a service plan.

But bundled devices are beneficial for consumers by removing high upfront payments that are a deterrent to use of high-end smart phones.

In some cases, there also are service provider effects. The report notes that there is some evidence that when one mobile service provider provides subsidized devices, and others do not, the non-bundling carriers suffer marketplace damage.

Possibly as a result of this experience Vodafone reintroduced what it described as a short term special offer, which included the price of a handset, at the end of July 2012.

The point is that benefits and costs for early device upgrade plans, or bundled or unbundled device sales, are quite subtle.
at July 19, 2013