As planned, the European Union’s plan to lower the cost of mobile roaming within the EU has set a new stage on July 1, 2013, with additional limits on prices for use of roaming data by about 36 percent.


The EU also has mandated price caps on voice roaming and text messaging as well. As a result of the wholesale price caps retail price reductions of over 80 percent have happened since 2007.


Roaming data charges now are set at 45 cents per megabyte, down 36 percent from 2012 levels.


Placed roaming calls are capped at the wholesale level of 24 cents a minute, a 17 percent reduction from 2012 levels.


Charges for receiving a roaming call call dropped to seven cents a minute, down 12.5 percent compared to 2012.


The cost of sending a roaming text message declines to eight cents, an 11 percent reduction compared to 2012 levels.


Operators are free to offer cheaper rates, and some have already begun to remove roaming premiums altogether for voice and text messaging, or offer a roaming-free area region across one section of Europe or another.


On July 1, 2014, another planned price reduction will happen, dropping roaming data charges to 20 cents per megabyte, while initiated voice calls will decline to 19 cents a minute.


The cost of receiving a roaming call will dip to five cents a minute. The cost of sending a text message will drop to six cents. 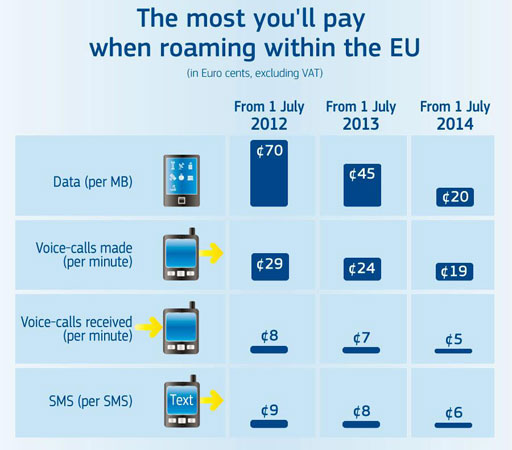