Despite all the challenges, ranging from mature markets to limited sources of new revenue to heightened competitive pressure, U.S. telecom and cable companies still are expected by Fitch Ratings to turn in stable operating results that are resilient to changes in the economy.


But Fitch also believes the service providers have a bit of wind in their sails, as Improvements in economic conditions, particularly stronger employment and housing trends, will lead to a healthier overall operating environment.


To the extent there were gains, Fitch Ratings points to tablet accounts as the driver, creating a more stable and predictable revenue stream for mobile operators. But subscriber gains are not seen as the way mobile service providers will make revenue gains. Instead, it is more spending on usage plans that will be key.


The slower growth reflects the high penetration of video subscription households in the U.S., the mature video service product, tepid economic and housing recovery and, to a lesser extent, competition from alternative distribution platforms.


Fitch points out that the largest incumbent local exchange carriers “continue to transform their consumer businesses into broadband- and video-focused models.” In fact, at Verizon and AT&T, those gains are “sufficiently mitigating the ongoing secular and competitive pressures of their respective consumer landline businesses.”


That is not so much the case for much-smaller telcos, as video entertainment is a scale business. Under those conditions, lack of scale also means lack of margins.


Such prospects are one reason the AT&T Project Velocity IP initiative will extend IP-based wireline broadband service to approximately 57 million customer locations (both consumer and small business) representing 75 percent of the customer locations within the company’s 22-state service area by year-end 2015.


In the remaining 25 percent of customer locations where it will not be economically feasible to upgrade the wireline network to faster broadband speeds, the company will offer a 4G Long Term Evolution solution instead.


About 90 percent of U-verse customers will have the capability to receive speeds up to 75 Mbps and 75 percent will be able to buy 100 Mbps service.


In other cases, where AT&T has concluded it cannot afford to build full U-verse connections, and DSL has to be used (about 24 million locations), speeds up to 45 Mbps will be available to 80 percent of DSL-served locations, while half will be able to receive 75 Mbps service.


AT&T estimates that 75 percent of its U-verse TV subscribers have triple- or quad-play service with the company, pointing out the strong reliance on video and broadband services in driving AT&T revenues. U-verse triple-play subscribers generate $170 of average revenue per user a month.


Verizon likewise reports that 66 percent of its FiOS subscriber base buy a triple play package and generate $150 a month ARPU. The need for broadband and video revenues is obvious.


In aggregate the ILECs lost approximately 0.966 million wireline voice connections during the first quarter of 2012, compared to a net loss of 1.105 million for the same quarter of 2012. 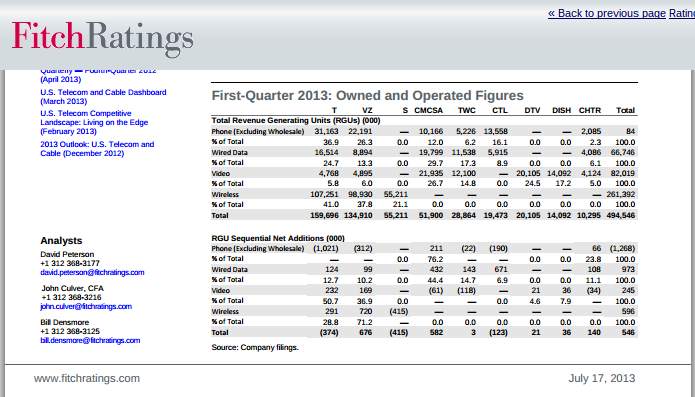