Teenage users in South Africa, for example, use their mobiles and fixed network access in ways that minimize costs, maximize convenience and use the strengths of each method at different times and places.


Among low-income users, free use (such as that in a library) supports resource-intensive content creation or work operations where storage, time, bandwidth and bigger screens are key requirements or at least more conducive to achieving the Internet session goals.


But users avail themselves of their mobiles for Internet access for time-sensitive pursuits, interpersonal communication and low-bandwidth media consumption.


Shared access venues are seen as better for consumption of media and working with large-format documents, while mobile access supports everyday social connections and messaging. 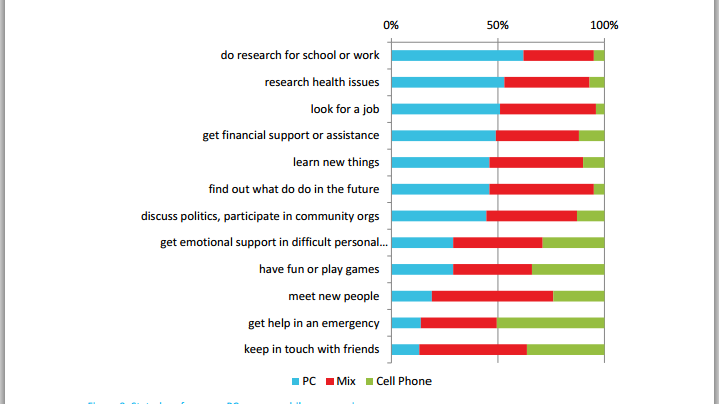 In South Africa, of 8.5 million Internet users in South Africa, 7.9 million accessed the Internet on their phones in 2011, and that 2.48 million of these used only mobile phones for their Internet access.


Also, among a population of 49 million people, ITU estimates suggest there are 725,000 fixed broadband subscriptions, but over 50 million mobile subscriptions.


One possible conclusion is that Internet users, rich or poor, are sophisticated consumers of Internet access services. In developed nations, end users likewise mix use of mobile Internet and fixed network access (Wi-Fi, typically) during the course of a day, in ways that similarly provide value at lower cost.


But it appears cost is not the only dimension upon which consumers are sophisticated.


Internet access speed might be a major reason large number of developing market public access users use shared computing services, even when they also have computers and Internet connections at home, a study suggests.


In other words, people are smart. They use Internet access tools the way they might use other tools, each with a purpose.


In Brazil, home Internet penetration at home among shared venue users was 40 percent, compared with the 24 percent national average. In other words, a significant percentage of people with at-home connections still use shared Internet access centers.


In Chile, 33 percent of public access users had Internet connections at home, as
did about 25 percent of users in Ghana and the Philippines.

In other words, the Global Impact Study of Public Access to Information & Communication Technologies study suggests users are aware of the benefits of using different access networks and services, in different ways, for different reasons that provide higher value.
at July 11, 2013