Based on its Churn Rates, Netflix is Way Ahead of its Competition

Are churn rates for over the leading over the top video services high or low? The answer, of course, is always “in relation to what?”
Netflix subscriber churn, for example, might be considered quite low for a consumer service.
Over the last year, four percent  of U.S. broadband households cancelled their Netflix service, representing nearly nine percent of Netflix’s current subscriber base. At 0.075 percent monthly churn, that represents a churn rate lower than experienced by AT&T and Verizon Mobile, for example.
Hulu Plus customers churn at higher rates. Over a year, Hulu Plus churn is in the 50 percent range, meaning that about four percent a month, which most observers would consider high churn.
Other services fare even worse, with churn rates as high as 60 percent annually, or about five percent a month.
Currently, 85 percent of U.S. broadband households subscribe to a linear video subscription  service, while 59 percent of U.S. broadband households have an over the top video subscription.
Of those who use OTT video, a bit fewer than half use two or more OTT services.

Half a decade ago, for example, mobile subscriber churn   was far higher than it is today. About 2010, monthly churn of two percent to three percent a month among some of the largest four U.S. mobile service providers was not unusual. 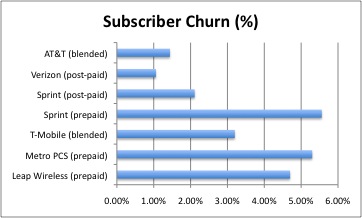 And churn has consequences, tending to decrease the average lifetime value of any account. 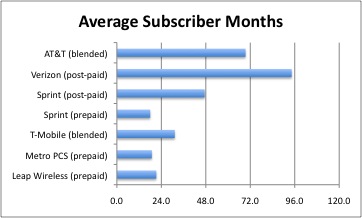 High churn rates might be explained in different ways for apps (especially free or low cost apps), as compared to low-cost or high-cost subscription services. Very high rates of churn--well beyond three to five percent a month--might be normal for mobile apps, for example, where consumers sample lots of apps and find most not to have long-term value, leading to high churn rates.


Churn also tends to be higher for new services consumers are unfamiliar with, since there is lots of sampling.


Churn is a more-serious problem for established products that consumers understand well. High churn for those sorts of products tends to indicate some consumer issue with the product.


The point is that Netflix seems to be a service with very low churn, even when one might otherwise predict high levels of churn.

Netflix--especially the streaming product--is a new type of product, competing against many other functional substitutes.
at July 30, 2015