If that is true, the “hockey stick” part of the sales growth curve is about to happen.

And though “economics” (cost-benefit) always is important, SMB decision makers increasingly indicate that “who they buy from” also is a key issue.

In part, that is because SMBs tend to prefer the “one stop shop, rather than best in breed” approaches to buying technology.

So success might be greatest for suppliers who “get the offer right” and become viewed as “one stop shops.”

The study suggests cable TV operators and telcos are “neck and neck” in sales to firms with 20 or fewer employees.

That, one might argue, is a classic difference between early adopter and early mainstream buyers. Early adopters care lots more about raw features and capabilities, are are willing to tolerate some less than fully polished offers.

In about 30 percent of cases, small enterprises (20 or fewer employees) don’t actually “manage” their communication systems. “They just hope it works,” said Macario.

In other words, that portion of the market sees the buying of communications capabilities as a business decision, not a technology decision. “Easy to use,” “affordable” and “does what I want” therefore are important attributes.

In other words, the value, compared to price, while still important, is trailed only by the importance of trusted suppliers. 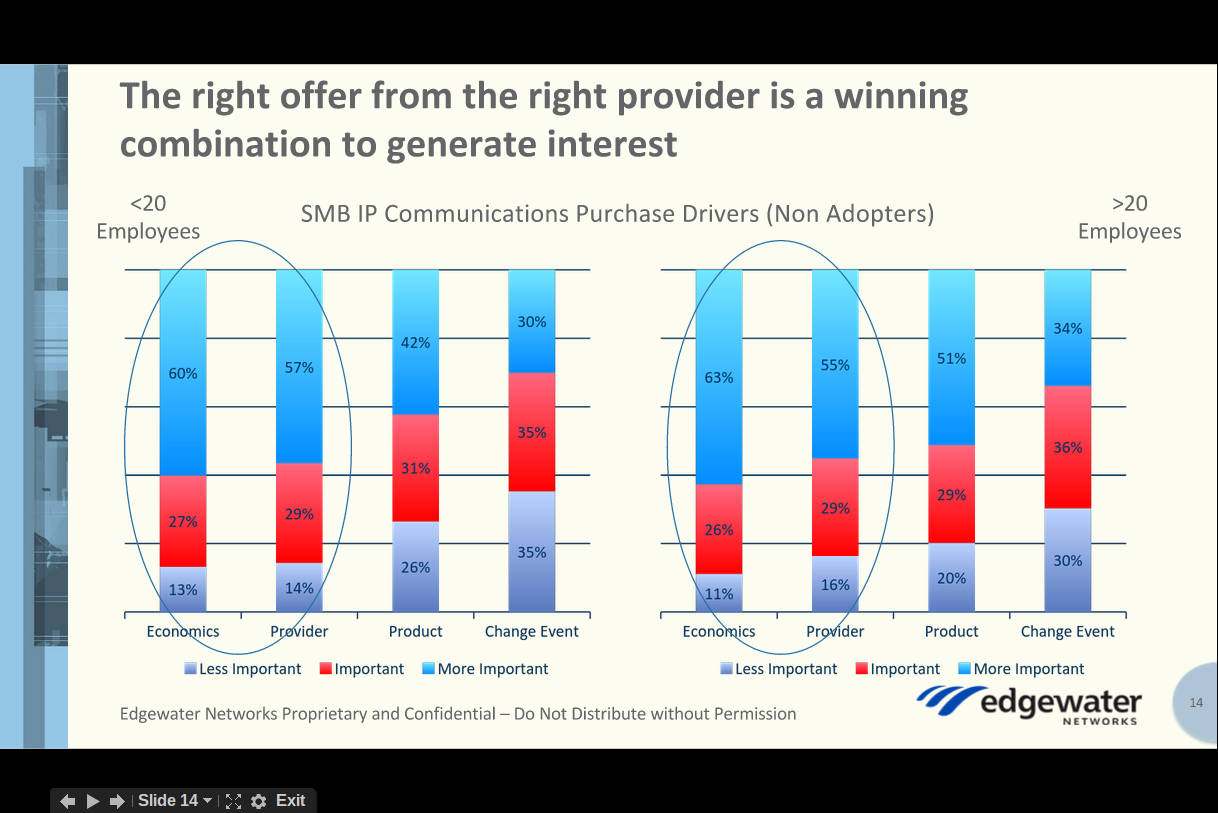 All prior predictions of when the IP communications business might cross the chasm have proven to be false.

Although IP adoption rates have increased over the last decade, the new survey sponsored by Edgewater Networks and Metaswitch Networks clearly shows that a large percentage of the small and medium business (SMB) market in the United States, “perhaps more than expected,” still uses TDM systems and services.

While adoption rates are higher in larger organizations, as high as 36 percent for organizations with 500 or more employees, adoption for smaller SMBs (less than 100 employees) is less than 25 percent. 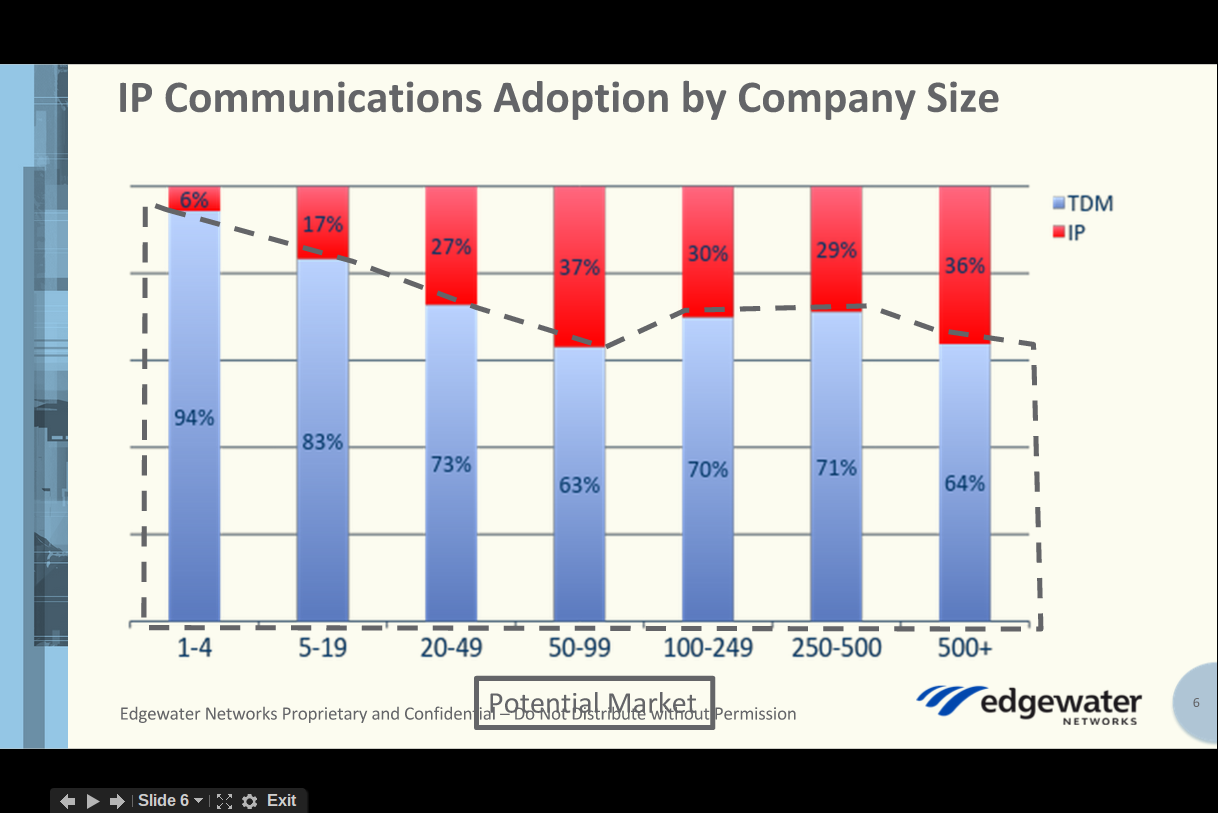 So what is different now?

The majority of SMBs today are using aging TDM phone systems with an average age of about six years.

Still, typical system “end of life” has ranged between seven and 10 years.

But in today’s IP market, obsolescence comes faster, as soon as every four years, some argue. Consider the mobile phone analogy: nobody would think a three-year-old mobile device has up-to-date features and capabilities.

“More than 50 percent of phone systems are more than six years old,” Macario noted. That suggests the timing is right for major replacement activity.

So the gap between legacy voice systems and modern IP business communications therefore is widening faster.

Of course, there are other changes. Until recently, the IP communications distribution system has been highly fragmented. But there are signs of a major change, namely the entry of cable TV operators as serious players in the SMB hosted IP communications business.

As has been the case in voice, high speed access and now business communications, entry by cable TV operators has reshaped markets. And there now are signs that market push by cable operators is having an impact.

That has been the case, you might recall, in SMB high speed access markets, where ever-more-significant cable TV sales efforts have taken share from all other competitors, including other competitive local exchange carriers, resellers, integrators and distributors.

Ubiquitous use of mobile devices and reliance on messaging arguably also has helped to change the buying context. The old issue was “voice.” The new issue is messaging.

The other possible change is simply “time.” It often is the case that even important technologies take a decade or more to reach ubiquity.

And that might doubly be the case for technologies that simultaneously restructure existing older businesses and create new markets.

So IP communications “crossing the chasm,” if true, means rapid change. Not only adoption rates and revenue, but sales strategies and channels will change.

Also, the value of incrementally-valuable new services (storage, security, backup for example) should grow as mainstream adopters look for easy to use, comprehensive support for a variety of business problems.

And the survey suggests storage and backup is the next place to add features.