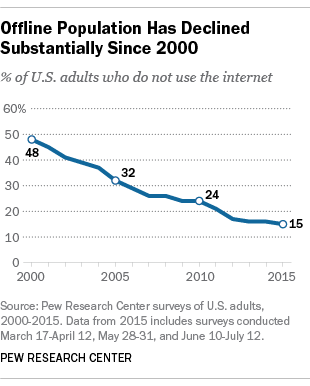 A stubborn 15 percent  of U.S. adults do not use the Internet, according to the Pew Research Center.

The size of this group has changed little over the past three years, despite recent government and social service programs to encourage internet adoption.

Two observations: perhaps we sometimes forget that people have the right to exercise lawful choice. If people do not want to use the Internet, as much as we might think they “should,” they have the right to refuse, for any reason.

At some point, in any business or endeavor, the last increment of progress is so costly it is rational to consider not bothering to achieve it, and allocating effort and resources to some other important problem where the input will achieve greater results.

The other observation is that we have seen such technology laggard behavior before. Such problems fix themselves, assuming the innovation is widely perceived to have value.

The point is that the 15 percent of people who do not use the Internet may not wish to use it, and that the number of non-users will likely fall to insignificance over a relatively short period of time, if only because “using the Internet” will take so many forms that people may not even recognize.

Traditionally, some non-users have said they simply do not want to use the Internet.
A 2013 Pew Research survey found 34 percent of non-users did not go online because they had no interest in doing so or did not think the internet was relevant to their lives.

Some 32 percent of non-internet users said the internet was too difficult to use.

Cost was also a barrier for some adults who were offline and 19 percent cited the expense of internet service or owning a computer.

One might argue that the “owning a computer” will be a minimal problem in the future, since all smartphones will provide that function, as will tablets. With the spread of Wi-Fi, private and public, we also can reasonably assume that the cost of access will cease to be a real problem.

The latest Pew Research analysis continues to show that internet non-adoption is correlated to a number of demographic variables, including age, educational attainment, household income, race and ethnicity, and community type, as most would expect.

Seniors are the group most likely to say they never go online. About 39 percent of people 65 and older do not use the internet, compared with only three percent of 18- to 29-year-olds.

Over time, that implies non-use will be a status three percent or fewer people actually have. We can assume that free Wi-Fi will be plentiful enough that the cost of access will not be a real barrier. Nor will devices, as smartphone adoption will be nearly universal.

Rural Americans are about twice as likely as those who live in urban or suburban settings to “never” use the internet.

Racial and ethnic differences are also evident. One-in-five blacks and 18% of Hispanics do not use the internet, compared with 14% of whites and only 5% of English-speaking Asian-Americans – the racial or ethnic group least likely to be offline.

Despite some groups having persistently lower rates of internet adoption, the vast majority of Americans are online.

Over time, the offline population has been shrinking, and for some groups that change has been especially dramatic.

For example, 86 percent of adults 65 and older did not go online in 2000; today that figure has been cut in half.

And among those without a high school diploma, the share not using the internet dropped from 81 percent to 33 percent in the same time period. The other issue is whether mobile apps “count” as Internet use, since many population groups over-index for smartphone usage.

The point is that, over time, the percentage of people who do not use the Internet will naturally drop nearly to zero. Chasing the last increment of change, when change will come even if we do almost nothing, might not be the best use of resources and effort.
at July 29, 2015