As often is the case, trends vary by region, and the biggest shifts will occur in emerging nations and regions.

While revenues in more developed markets will remain relatively static over the next seven years, those in developing regions will fall significantly.

In contrast, revenues in Africa will fall nine percent, while revenues in the Middle East will decline 11 percent a year.

Although overall Internet traffic is growing fastest in emerging markets, Internet service providers in these areas are migrating from purchasing transit to establishing mostly free peering arrangements more quickly than those in Europe and North America, where peering is already common, TeleGeography argues.

TeleGeography forecasts that the share of African Internet traffic exchanged using IP transit will fall from 84 percent in 2015 to 62 percent by 2021. 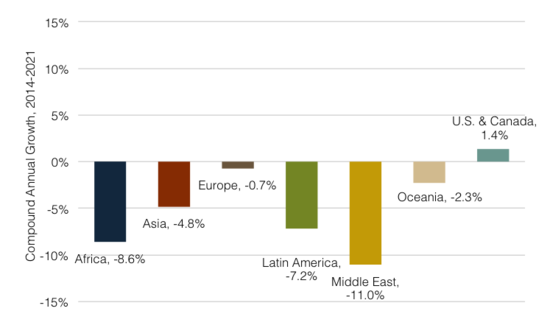 Infrastructure costs also play a role. IP transit is much cheaper in the more developed markets of North America and Europe, and it often makes economic sense for ISPs in these regions to pay for transit rather than incur the cost of building infrastructure required to peer.

The share of U.S. Internet traffic exchanged using IP transit is expected to fall only moderately over the longer term, from 44 percent in 2015 to 39 percent in 2021.