Will the cloud infrastructure or cloud apps businesses be characterized by the same “winner take all” pattern that seems to be true of most consumer Internet apps? Perhaps not, as cloud computing is an enterprise service, purchased by businesses and other entities, not mostly by end users directly.


Perhaps the question is more narrowly whether the cloud infrastructure market will have a winner take all structure over the long term.


The answer might be harder to glean than first appears. On the surface, four providers seem to hold commanding market share leads, namely Amazon, Microsoft, IBM and Google.


The problem is that each firm counts different revenue sources within its “cloud revenue” total. Amazon likely is the biggest supplier of pure-play infrastructure as a service. Others might be bigger on software as a service or platform as a service, particularly Microsoft and IBM.


That is why some believe Amazon actually has a bigger market share than generally believed, in the core computing as a service market.


IBM has cloud revenue of $7.7 billion, but a big chunk of that comes from "hybrid cloud," which involves companies buying both hardware and software. Its more comparable "as-a-service" business is will only pull in $3.8 billion.


Microsoft boasts cloud revenues representing a $6.3 billion revenue run rate. Most of that revenue likely comes from Office 365, however. While that clearly is SaaS revenue, it is not computing as infrastructure revenue.


“The cloud infrastructure services market is quite clearly bifurcating with a widening gap between the big four cloud providers and the rest of the service provider community,” said John Dinsdale, a Chief Analyst and Research Director at Synergy Research Group. “ 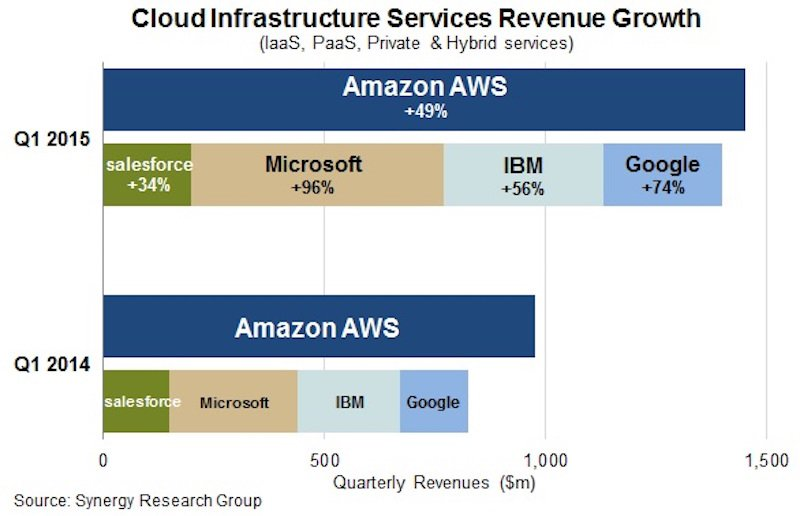 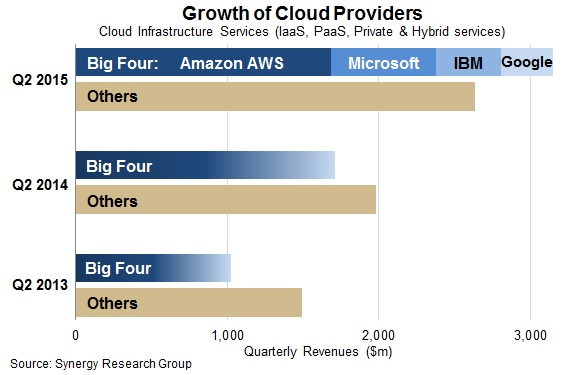