Why Consumers Won't Pay Much for Any Single Show

There is a logical reason why most consumers likely consider the fair price for any single piece of content (a story, a song, a picture, a video, a TV show) normally purchased as part of a subscription service to be a fairly low number.
Consumers “logically” compared the cost of a compact disc, with 10 to 12 songs, to the download of a single song.
It wasn’t very hard to figure out a “fair price” of about $1 to $1.30 each.
Much the same sort of logic is likely to play out as TV content services are unbundled. Consider a single channel, with a wholesale price to the distributor of less than $1 a month. Triple that number to cover network, marketing and other overhead costs, plus profit and taxes, to $3 a month.
Consumers are going to conclude that any single show should not cost very much.
Nobody will be able to rationally figure out how much attributed cost is the “right number.” And delivery costs in a fully unbundled market are likely to be much higher, actually.
It won’t matter. Consumers simply are going to assume that if a whole channel costs “X” for a whole month, then a single show should not cost much at all.
X divided by 30 will be the assumed “all you want to watch for a day” cost. Then assume 48 discrete shows in a day, and the assumed cost for one show is going to be X/30/48. It will be a small number.
The reality of costs in a new unbundled environment won't matter much 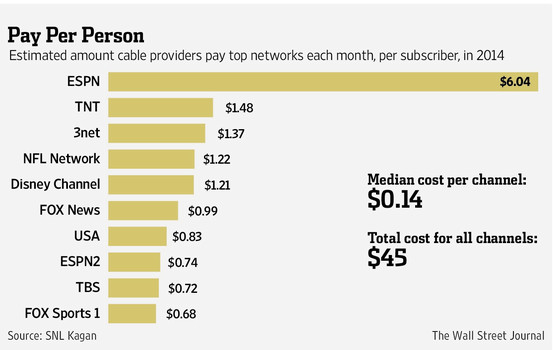