It is hard to say for certain whether Internet service provider capital investment is up, down or flat since the imposition of common carrier regulation on consumer Internet access services.


Some claim investment is higher, across the board.


Others claim that investment is up at select ISPs such as Comcast, Time Warner Cable, and the wireless division of Verizon.


Still others claim that we should ignore changes to ISP capex in the first quarter of 2015, since that quarter’s activity does not represent on-going investment decisions.


Others say capex is down. 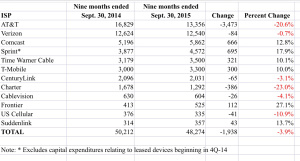 
On net, Singer argues, capex fell by $2.9 billion across the largest ISPs excluding Sprint, T-Mobile, and US Cellular (the pure wireless ISPs).


Including the pure wireless ISPs still results in an aggregate decline of nearly $2 billion relative to the same period in the pre-Title era.


Some of us would not pin all capital investment trends on any single driver. Business strategy, need to reserve capital for other purposes, completion of upgrades and competitive threats (Google Fiber, for example) all are factors.


On balance, ISPs have to weigh investment returns with competitive threats. Sometimes, competition forces investments that might have sub-optimal financial returns, but are necessary for competitive reasons.


That long has been the case for smaller fixed network telcos, and might now be at work for all fixed network or mobile service providers.


In other words, asked to explain why fiber to the home investments were required, executives might privately have conceded that actual net revenue growth was not the driver. Instead, fiber to the home was a strategic investment; something necessary so firms could continue in business.