Who are Greatest Competitors for Mobile Operators?

When the most-significant perceived competition comes from entities outside, rather than inside a “market,” it is a sure sign that a market is changing. And that arguably is the growing case for mobile and other telecom service providers.


That might strike some of you--especially those of you who work at service provider organizations, or have done so--as discordant. Keeping in mind the difference in perspective between “C” level executives and mostly everybody else in an organization, actual behavior does not match the stated perceptions.


What C level telecom executive, on any service provider quarterly financial results call, actually spends much time addressing how the firm is faring against OTT providers? Seriously.
To be sure, the point of such calls is to report on how each firm fared, during the quarter, on its own financial and operating performance metrics. Comparisons to the competition tend to be scant.


But both the presentations and questions from financial analysts center on core results, or perspectives and strategies to support core results going forward.


Performance and especially revenue growth of new lines of business always will be highlighted, however. But when was the last time you recall a company’s leadership spending time pointing out new revenue initiatives that actually compete directly with Google, Facebook, Apple or Skype?


Some might say that is because actors really do not understand their businesses. But there is another way to view the apparent attitudes with the demonstrable behavior.


The way questions get asked shapes the responses in ways that can obscure the answers. In other words, OTTs represent a challenge, but not directly. The direct challenges come from other service providers.


When an executive suggests OTTs are the biggest competitive threat, what is meant--and understood--is the destruction of the service provider business model overall.


In other words, executives clearly understand that the revenue and margin-producing value of voice, messaging and other services is eroded by OTT alternatives.


But that does not make Skype, Apple, Google or Facebook the biggest actual competitor. OTT does rip value out of the service provider role in the ecosystem. In that sense, the separation of content and apps from access is the big strategic problem, and is well understood.


But, as a rule, the key competitors remain “other service providers” able to take market share and customers away from any particular provider.


In other words, there are two separate domains here. The first domain concerns the strategic shifts in value creation within the content and communications value system. That is not, per se, an instance of competition between actors in market segments, but an overall change of the ecosystem.


The second domain, of “what market are we in” is where actual competition occurs, and is measured.


That is not to say some entities operate in multiple segments of the ecosystem. Some firms actually do have significant “access” and “content creation” businesses, and therefore operate across several parts of the ecosystem, for example.


The matter is complicated because the way competition happens redefines markets. Netflix is an entertainment video distributor, is an OTT provider, and does compete, in some meaningful way, with linear video distributors including satellite, cable TV and telecom providers.


Google Fiber and other entities do compete directly, in some instances, with core services provided by cable TV and telco ISPs.


So OTT providers that originally represented a “hollowing out of the business model” can, in fact, become direct competitors. 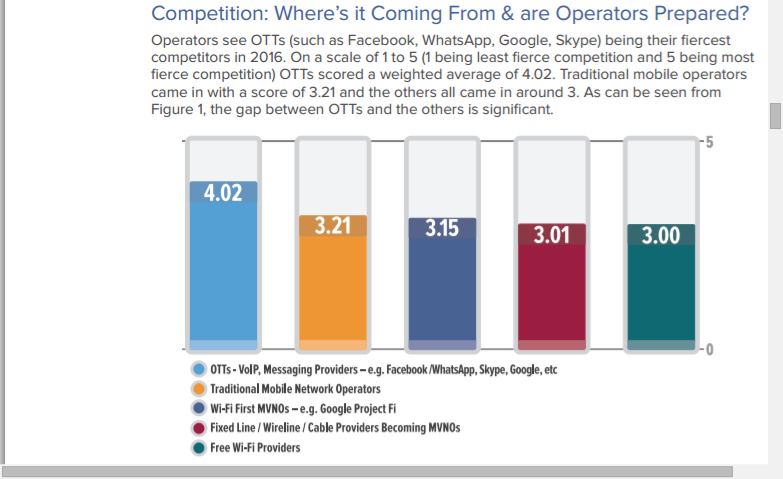 
One never should assume leaders in any market “do not understand” their challenges, or understand “in what markets” they operate. So maybe there is another way to interpret the results.
at November 16, 2015