In Era of Streaming Video, ISPs Have to Invest More, As Contention Ratios Have Changed

Video streaming is changing principles that underpin the design of fixed networks, including contention ratios that incorporate assumptions about the amount of resource sharing any network can support.


The practical impact is that the advent of video streaming reduces contention ratios. That, in turn, means more capital investment, since less sharing of resources is possible. In the past, some networks could support narrowband traffic at contention ratios of about 50:1.

In large part, the new problem is that video is a very bandwidth-heavy media type. So users consume more bandwidth per minute than they used to do. Also, entertainment video consumption peaks in the evening hours.

As always, networks are sized for peak load, not average load. So investment has to support peak video load in the evening hours. That long has been the case for Internet traffic, but video magnifies the problem.

At peak hour, Netflix alone represents as much as 35 percent of traffic. 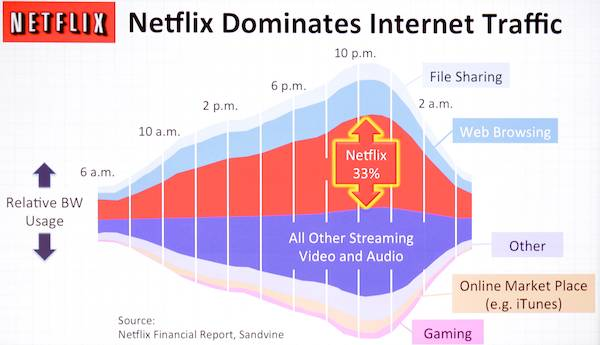