U.S. Fixed Network Broadband is "Among Most Affordable" in the World, says ITU

From time to time, observers complain about the high price of fixed network Internet access, especially when prices climb. A typical line of argument is the retail price, expressed in dollars, compared to prices in other countries, also expressed in dollars.


Analysts who work across regions and nations globally know there are issues with such comparisons. To normalize “prices,” analysts often use purchasing power parity or measures that index communications spending to household income, for example.


Those methods often provide a more-realistic way of comparing prices, since they are expressed in terms that are normalized for purchasing power differences.


In that regard, an International Telecommunications Union report shows that U.S. fixed network broadband prices are exceedingly low, expressed as a percentage of gross national income per person. That is not the only way to compare prices across countries, but is instructive. 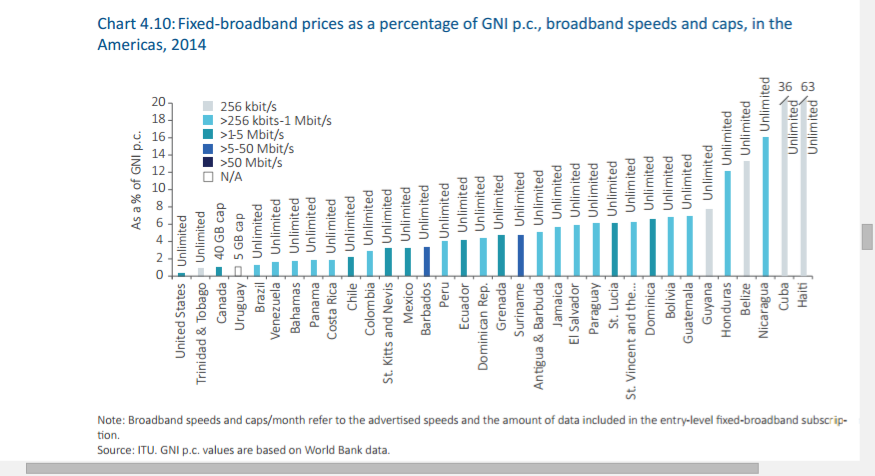 
In developed countries, the fixed-broadband basket has been relatively affordable for a number of years, but prices are no longer falling.


Between 2008 and 2013, the price of the fixed-broadband basket as a percentage of GNI per person fell from 2.3 percent to 1.4 percent. That figure remained unchanged in 2014.


While prices for fixed-broadband services are comparable in absolute U.S. dollar  terms across developed and developing countries, they remain much higher in terms of purchasing power parity values.


In 2014, fixed-broadband services in developed countries cost PPP$27, compared to PPP$65 in developing countries. This is not the case for fixed telephone and mobile prices, as prices expressed in purchasing power parity are almost the same in developed and developing regions.