A narrowing of the price difference between public and private cloud is changing the value equation for private cloud computing, Verizon argues.


In the past, the approach taken by many companies roughly followed a similar model: public for non-sensitive workloads; private cloud for more sensitive stuff; and traditional on-premises for difficult-to-move and highly sensitive workloads.


Because the cost of private cloud is falling, it now makes sense for many companies to move more of their workloads to private cloud.


“There will always be a place for public cloud, especially for workloads that need lots of elasticity but perhaps not so much in the way of risk management and governance,” Verizon argues. Many websites (but not e-commerce) and testing projects would fall into this category.


But with the cost difference falling, Verizon argues, companies will reduce use of public cloud and increase private cloud usage.


Verizon argues “that in the future it will only be used for a narrow set of workloads.”


At the moment, about half of enterprises have a hybrid approach, using both public and private cloud computing, Verizon says. 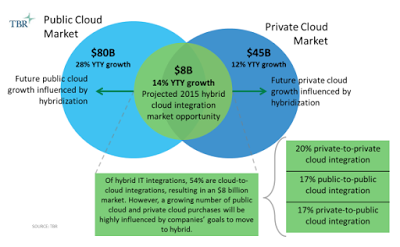