Historically, content businesses in the United States have tended to develop in “vertically integrated” form, and then are subjected to regulation to prevent full integration. That is why there are ownership restrictions on movie studies owning theatrical exhibition assets, or limits on TV networks owning local broadcast TV stations.
Online content markets are too new to have developed major political pushback against integration.
But content ecosystem roles are evolving in ways that mimic older forms of vertical integration, and might eventually lead to new restrictions on such integration. For that moment, that remains a distant probability.
In the older model, while some degree of multi-role ownership is permitted, roles were fairly separated. TV networks were mostly relegated to program development, while others handled distribution.
The emerging online markets have yet to take full form. But one notable trend is that, in most cases, ecosystem contestants are attempting to operate in multiple roles. Google might mostly be a platform, but it also has become a distributor and an access provider. So far, Google has made fewer strides toward a content producer or packager role, compared to Amazon, but that seems to be on the horizon.
Netflix and Amazon mostly are distributors, but also partly content developers. Verizon and BT mostly have been distributors and access providers, but are moving into other roles in content packaging.
Such blurring of ecosystem roles also is characteristic of any unstable industry, especially those undergoing technology change and business model evolution. Typically, contestants first move into the adjacent roles. Content creators (studios and producers) look at packaging (Hulu).
Packagers move into content creation (Amazon or Netflix). In fact, in an online delivery context, the roles of packaging and distribution fuse, in many cases. Netflix both packages and distributes.
In the case of Amazon producing its Kindle devices, a further move into user interface also has occurred. In an online ecosystem, the role of “platform” likely also must be added, something Facebook and Google best exemplify.
Apple would occupy the primary role of user interface, but also became a packager and distributor with iTunes.
As always, vertical integration makes sense for a content business. Just as inevitably, at some point, regulators step in. That will be quite messy. 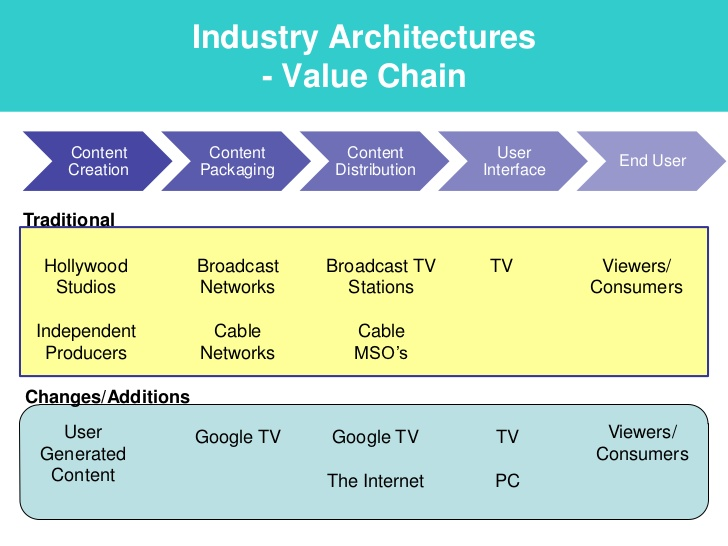