Content, Not Speed or Price, is How Mobile Ops Will Compete in Future

A very good rule of thumb, when assessing consumer or business behavior, is to watch what they do, not what they say. For example, telecom executives often tell researchers that their biggest competitors are over the top app providers.


But some would say they take action in ways that suggest the “real” competitors are in fact, other service providers, not app providers, as surveys often suggest is the case.


Not very often does any tier-one telco or mobile service provider actually take a concrete step--and back that with spending commitments--that suggest an app provider really is viewed as a key competitor.


As just one example, leading mobile service providers often adjust their own policies, prices and packages based on what some other major competitor just has done. At other times, actions are taken to distinguish one contestant from others in the market.


Cable operators are not upgrading their networks to gigabit speeds because of Facebook or Netflix, but because of Google Fiber, a facilities-based and direct Internet access and video entertainment competitor.


What executives might be signaling that the leading strategic concern is loss of value, revenue and profit margin from core services to OTT competitors.


That concern is legitimate, but does not conflict with the reality of direct competition from other leading service providers as the driver of real-world actions.


There is an important strategic implication: some app providers--particularly in content areas--will almost certainly emerge as key partners as mobile service providers look for ways to differentiate their offers in ways other than “speeds” and “prices,” the two major ways mobile operators have competed to this point.


As Long Term Evolution networks--and coming fifth generation networks--are fully deployed by virtually all leading mobile service providers, and if spectrum allocations become more even, among the leading suppliers, “speed” will not be a differentiator.


At some point, neither will “price,” since competitors can match offers when they must. The main reason subscription video average revenue per user has not declined in decades, compared to every telecom service, is that entertainment video is content.


Good content is hard to produce and inherently limited, which has value--and therefore pricing-- implications. That means mobile operators often will bundle OTT video to create distinctiveness, and likely will find other content-related apps useful for the same reason.


Some would point to Netflix and Spotify, Binge On and other efforts as examples.


And that means partnerships between OTT app providers and mobile service providers, as a long-term trend.


The issue is how much differentiation is possible. The answer might vary, market by market, based on regulatory rules enabling or prohibiting certain promotions or policies, such as exempting video consumption from data plan usage, pre-processing video for better bandwidth efficiency, allowing free access to video services or other measures that create differentiated offers. 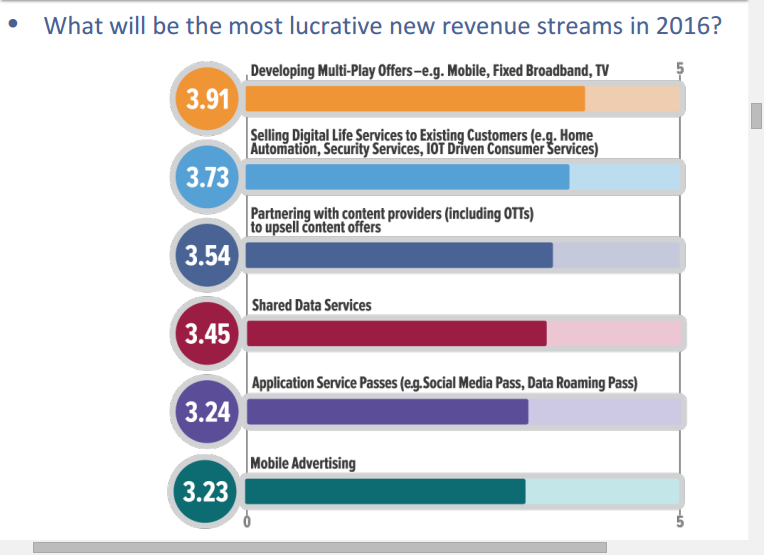 At the January 2016 AT&T Developer Summit and Hackathon, Tom Keathley, AT&T SVP for wireless network architecture and design, pointed out that video generated between 40 percent and 50 percent of data traffic on the AT&T mobile network and more than 50 percent of traffic on its wired network.


Keathley suggested it would be not unreasonable to expect that entertainment video would grow to perhaps 70 percent of mobile data traffic by 2018.


AT&T would consider efforts such as limiting of video stream quality to match a device screen’s capabilities, perhaps at 480p resolution, as a possibility.

That will enrage some policy advocates who insist “all bits be treated equally.” Whether that is possible, or desirable, is the issue.

But such pre-processing also illustrates why content bundling will be more strategic in the future. It is content that now drives mobile data consumption, while content remains a key means for differentiating one carrier's offer from another's.
at January 07, 2016